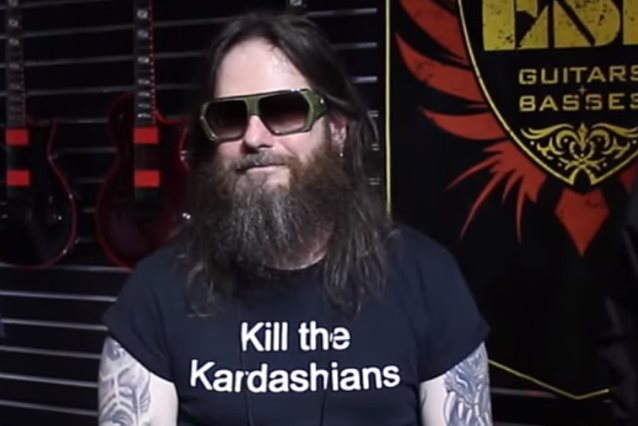 SLAYER And EXODUS Guitarist GARY HOLT: Why I Hate The KARDASHIANS

SLAYER and EXODUS guitarist Gary Holt spoke to RockSverige about the inspiration for the controversial t-shirt he started wearing in 2015 with the words "Kill The Kardashians" written on it, referring to the ultra-famous reality TV show family and stars of "Keeping Up With The Kardashians". "It was made by a friend of mine, Jack," he said. "[It was] put together just because he knows my deep, bitter, black hatred of them. It's like… I don't begrudge them for their money, I just fucking hate people that are becoming superstars for doing nothing. Kim Kardashian was a closet organizer and then she did a sex tape and became famous for it and now they stick their name on products and I hate their guts. So my friend Jack actually made the shirt for me first and then we decided to start our own little merch company No Love Apparel and sold them and it became like a huge viral thing."

He continued: "What was this guy's name? Some Internet star, another one of those kinda people I hate. An Instagram star who's famous for hanging out in places where famous people are. They call him the something 'Jew' or something [The Fat Jew]. I saw him on some reality show even once like 'The Real Housewives Of Orange County' or something. He was at some party. He posted the little dual photo of me wearing the shirt and one of the Jenners wearing a SLAYER shirt and the shit went viral from there."

Holt added: "I haven't worn them onstage for a while just because I was wearing it every night for a while, but I'll bring it back. Maybe I'll have to get a little more personal. Like, I left Bruce Jenner alone because I'm all for sexual identity freedom and someone said, 'You should do one like that!' and I said no, because I have nothing against the trans community or gay and lesbian people. I'm all for personal freedom and whatever nature meant you to be is who you are, so I left him alone even though I wanna fuck with him because there's a fucking Republican who voted for Trump who wants to take away all of his own rights, except Caitlyn Jenner is wealthy enough to where none of it affects her. So, yeah, 'You can vote for Trump. You've got all the money in the world. Your very own people are the ones that are gonna be hurt by it.' But yeah, I left him alone. The rest of the family and Kanye West are fodder enough. Fucking hate their guts."

The Kardashians' half-sister, model Kendall Jenner, was spotted in 2014 in Toronto wearing a SLAYER T-shirt, and was also photographed wearing a MEGADETH tee during the Coachella music festival back in April 2015.