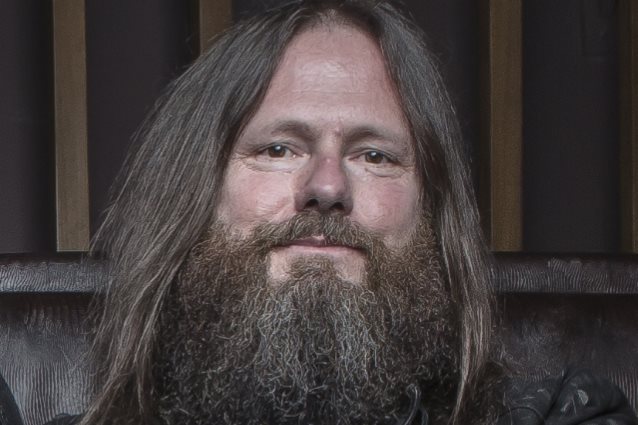 SLAYER And EXODUS's GARY HOLT: 'TED NUGENT Is A Total Idiot,' But He Is 'Also One Of My Favorite Guitar Players Of All Time'

EXODUS and SLAYER guitarist Gary Holt was interviewed on the September 15-17 edition of Full Metal Jackie's nationally syndicated radio show. You can now listen to the chat using the Podbean widget below. A few excerpts follow.

Full Metal Jackie: Let's talk about EXODUS first. It sounds like EXODUS is gonna go into the studio later this year to record a new album.

Gary: "Yeah, that's what we are shooting on. Tom Hunting [EXODUS drummer] and I are of the same mindset — that however long it takes to make this album what we want it to be is how long it's gonna take. Prior to the South American SLAYER tour, I had six months off, so I really used that time wisely, just writing and jamming with Tom and putting stuff together. We've got a few songs done, several in the works and thousands of riffs, it seems like. We're real excited with how things are coming along, so we're looking forward to getting to that point, when we can actually start booking studio time."

Full Metal Jackie: Creatively, what changes when you're writing songs, now that Steve "Zetro'" Souza is back in the band and will be singing them?

Gary: "Nothing, really. When I write a song, whether it's for Rob [Dukes] or Zetro or, much prior to that, for Paul Baloff, I just try to write an EXODUS song and just take it from there. And then, obviously, the voice is gonna round it out and complete the song, but I don't write differently whether it's for one [singer] or the other — I just write riffs until I like them."

Full Metal Jackie: Lots of people regard EXODUS as important enough to be included in a hypothetical "Big Five" of thrash metal. What do you think is the most important thing EXODUS contributed to that genre?

Gary: "The most important thing we contributed to the genre? [Laughs] That's an easy one: the genre itself. [Laughs] I mean, we are arguably the first thrash band. And the only other one you could really make an argument with is METALLICA, and I think, at the time we were both starting to do our thing, neither of us knew the other existed. So, yeah, I mean, we definitely made a big contribution, 'cause we helped create it. But 'Big Four', 'Big Five', 'Big Ten'… I don't know… We were one of the first, so I think we have every right to be there. I've always said, when everybody talks about the 'Big' this or that, they always forget about the Germans. KREATOR, DESTRUCTION and SODOM were there in the very beginning too, they were there earlier and before a lot of the American thrash bands that people like throwing in these hypothetical arguments. So I don't limit it strictly to United States soil; I think the Germans should have a voice in this as well."

Full Metal Jackie: Let's talk about SLAYER. "Repentless" was your first album with SLAYER, and although you weren't part of the songwriting, Kerry King has expressed willingness for you to be involved next time. How would you need to approach songwriting differently with SLAYER compared to EXODUS?

Gary: "Don't write ten-minute-long songs. [Laughs] I think that's the first thing. I tend to sometimes, in the EXODUS realm, wander into some very progressive territory. And that's cool. I think… It's all thrash metal to me. I mean, I think the biggest difference between one band and the other and the next band after that is quite often just note selection. SLAYER's a band… A lot of riffs are very chromatic, and it's as simple as adjusting your style from one to the other, which, I think, after six-plus years in the band, I definitely have as good an insight as anybody into how SLAYER writes a song, since I can play such a large amount of the catalog. So, yeah, when that time comes and we are ready for the next album, if Kerry wants me to contribute, I've got riffs. I've got stuff right now that I've written that I am not using for EXODUS, because it was kind of maybe just unintentional subconscious thing, like, 'It sounds a little too SLAYER.' So I pushed that aside, 'cause I spend predominantly the bulk of my time playing in SLAYER nowadays. I've gotta make sure not to cross-contaminate. I've gotta treat both bands like a crime scene, you know."

Full Metal Jackie: You've been with SLAYER for six years. But what sometimes feels surreal and new to you?

Gary: "I don't know that any of it does. I think it's probably a little more surreal nowadays. And, I mean, it really sounds odd for me to say it, but it's a little more surreal when I get a rare chance to go back and do EXODUS shows. [Laughs] 'Cause those guys are my brothers for most of my life, and the SLAYER guys are my brothers too. I'm fortunate to be in a position where I have two bands that I call family. It's kind of like just second nature. And then, when I do get the chance to do some EXODUS shows, it's, like, I've been away for a while. So it kind of, like… I've gotta remember that this is the band that I've been in since I was seventeen years old."

Full Metal Jackie: Politically, it's a tense time in U.S. history. Speaking as a musician who is also politically aware, what role, if any, should a band have in political discussion?

Gary: "Heavy metal, and thrash metal in particular, has long since been a political musical genre, I guess is the best way to say. We've all written songs about nuclear war and the threat of nuclear war and all this and that. And all of a sudden now, people are, like, afraid to touch it, because the world is… music is completely polarized in opposite directions; it's so partisan. And I'm a liberal — everybody knows I'm a liberal, but I'm a liberal with really extreme right-wing views on certain things, like crime and punishment, and I support law enforcement and stuff like that. But people are so afraid to speak their opinion, 'cause people will swear off their allegiance to their favorite bands. Like, I think Ted Nugent is a total idiot. He's also one of my favorite guitar players of all time, and always will be. And anytime he says something stupid, it's never gonna make me go throw away my copy of 'Double Live Gonzo' — never! That's not why I love Ted Nugent — I love his guitar playing. Nowadays, people are like, 'Oh, they were my favorite band. Now I disagree with them [politically]. I don't wanna listen to that band anymore.' It's a touchy subject nowadays, which really blows my mind that people are so sensitive."

Full Metal Jackie: Between SLAYER and EXODUS, it would seem like you have little time for much else. When do you step back from music, and how do you recharge to go back to it?

Gary: "I had six months off at home, and that's a rarity — something I don't think I've ever had. And I used that to decorate the house and kidn of nest. And when I'm home, it's all about my family — my wife and my kids. And when it comes to rehearsing and stuff, I map it all out in a very structured manner that it is kind of, like, if I'm going to rehearsal, I'm going to work. If I'm writing songs, I'm going to work. And when I'm done, I'm done — I don't let it take over the entire day. I'll set aside the time for it and use it, and then my day's work is done and then I'm just back to spending time with my family. Hell, I'm gonna be a grandfather here. So I'm very excited about that. I couldn't be more excited. The family is growing, and I'm looking forward to it."