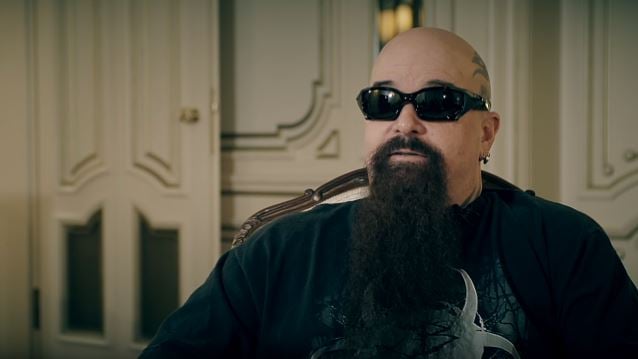 SLAYER guitarist Kerry King says that he "hated" ANTHRAX's collaboration with PUBLIC ENEMY on "Bring The Noise" but has defended his band's decision to work with hip-hop legend Ice-T.

ANTHRAX's version of "Bring the Noise", which was featured on the 1991 "Attack of the Killer B's" compilation, has been credited for laying the groundwork for rap metal and nu metal.

Asked by the Pittsburgh Post-Gazette how he felt about ANTHRAX's collaboration with PUBLIC ENEMY, Kerry said: "Oh, I hated it. And they know it. It's not a secret, or I wouldn't tell you. They don't play it a lot when we play together. Maybe it's cycled out of their set.

"We did something with Ice-T back in the '90s [a medley of three THE EXPLOITED songs for the 1993 'Judgment Night' soundtrack], but it wasn't a crossover song. It was still a thrash song because Ice-T loves thrash.

"When that was brought up initially for us to do, I was like, 'Nah, man, I don't want to be part of some rap song.' Nothing against rap, I like rap. I just didn't want SLAYER to do that. And then the idea of Ice-T came up, I said, 'Yeah, we can do that.'"

Kerry also talked about SLAYER's history with ANTHRAX. He said: "We played with them a lot in the last ten years, and before that we didn't, aside from 'Clash Of The Titans' [1990-91]. I don't even know why. Maybe because there were more bands to play with then, and there doesn't seem to be an infusion of new bands that are relevant enough to have an opening slot for SLAYER. What ANTHRAX has done the last couple records, it seems to me it has revitalized them."

In an interview with the Cleveland Music Examiner, ANTHRAX guitarist Scott Ian stated about the band's original decision to record a cover of "Bring The Noise": "By that point, there was a new audience, and we certainly reached a lot of new people with that PUBLIC ENEMY track. People who maybe weren't into what we'd done before, or who weren't metalheads. So that track crossed over for us and took us into a new zone. But it's funny, because we haven't done anything rap or crossed over since 'Bring The Noise', yet people once again still talk about it, which shows me how special it was. People still want to hear it and people still reference it all the time, and it's almost 25 years old. And sometimes we're categorized as a 'rap metal' band, when we only ever did the two songs — other then maybe screwing around with 'Looking Down The Barrel Of A Gun' with the BEASTIE BOYS as a B-side — but yeah. People still talk about it as if that's what we do."

SLAYER's seven-week North American tour with ANTHRAX and DEATH ANGEL kicked off in Cleveland on September 9.