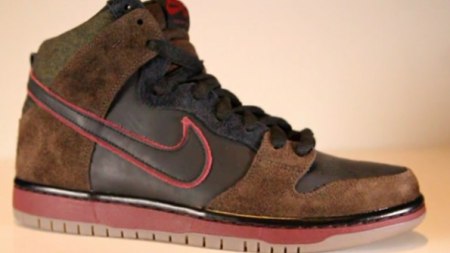 The Brooklyn Projects skateboard shop in Los Angeles has unveiled its very own Nike Dunk High sneaker draws its inspiration from SLAYER's "Reign In Blood" artwork. With a suede upper that bears shades of brown, black and red, the sneaker still makes room for a black leather toe box and side panel.

The Brooklyn Projects x Nike SB Dunk High "Reign In Blood" sneaker is rumored to be limited to 666 pairs and is set to drop sometime in June.

**UPDATE**: SLAYER's management has released the following disclaimer to BLABBERMOUTH.NET regarding the "Reign In Blood" sneaker: "SLAYER does not endorse this product and it is not an official SLAYER merchandising item."

Back in 2004, SLAYER teamed up with Vans to create the official limited-edition SLAYER Old Skools. The shoes, which were made to the band's specifications, featured an all-leather upper, custom SLAYER Eagle heel logo and SLAYER tongue label, black sidestripe and "red splatters" friction.

Shortly after the shoes were released, New York retail stores reported that some of their last pairs were selling for upwards of $300 simply because the shoes were expected to be a collector's item in the years to come (regular shoe prices ranged at the time from $50 to $55).