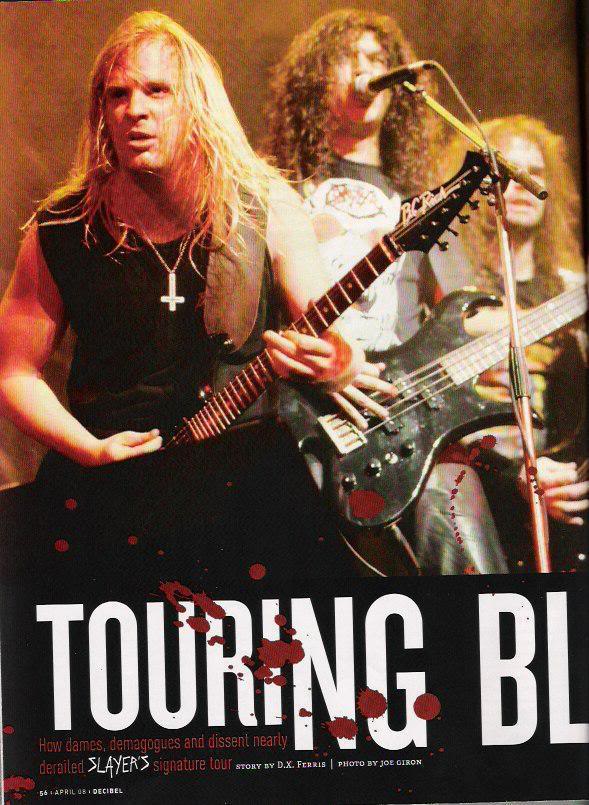 The April issue of Decibel magazine, now on shelves, features "Touring Blood," an article that takes a long look at SLAYER's 1986-7 American tour in support of the classic thrash metal album "Reign in Blood". The story is a leftover chapter that didn't fit into the final version of the upcoming book "33 1/3: Reign in Blood", which is due in late April, from Continuum International Publishing Group.

The SLAYER story is exclusively available in the magazine and can be viewed online:

Explains author D.X. Ferris: "For the book, the assignment was to write about the album, how it came to be, and what its ongoing impact is. The publisher gave me a lot more space than they'd initially asked for, but this chapter still didn't fit the bill. Leaving out this part was a tough call, but the people I talked to wanted to know more about the album and less about the tour. Writing and recording the album went pretty smoothly. The tour is when hell broke loose."

"Touring Blood" is based on archival material and new, original interviews with the entire group, SLAYER's manager, friends, and tourmates, including former OVERKILL drummer Rat Skates, Buzz Osborne of the MELVINS/FANTOMAS, and replacement drummer T.J. Scaglione. Scaglione filled in when Lombardo briefly quit the band in late 1986, leaving in a scene that could have ended in bloodshed. Other characters from this controversial episode include "Reign in Blood" producer Rick Rubin (who was also interviewed for the book),W.A.S.P. frontman Blackie Lawless, and future Warner Music Group CEO Lyor Cohen (who was then a rising star at Rush Management, the artist-relations division of Def Jam, SLAYER's label at the time).

Continuum Books' "33 1/3" series is a collection of over 50 books about and inspired by classic albums, from the BEACH BOYS to the BEASTIE BOYS. Ferris' "Reign in Blood" and John Darnielle's "Master of Reality" will be the first two metal albums in the series. Both are slated for April release, and are currently available, cheap, for pre-order at Amazon.com.