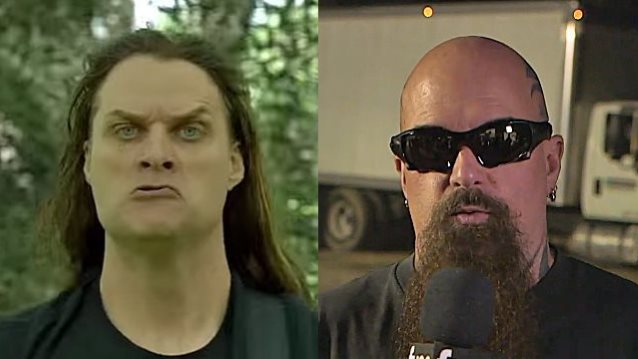 Vocalist Dave Matrise of Wisconsin death metallers JUNGLE ROT has slammed Kerry King over the SLAYER guitarist's controversial comments about the Rockstar Energy Drink Mayhem Festival, saying that Kerry "could've waited until he was done after the tour to open his mouth."

In a recent interview with Metal Insider, King criticized this year's edition of Mayhem, saying: "Do I know this tour wasn't booked correctly? Absolutely I know this tour wasn't booked correctly. Gary Holt [SLAYER guitarist] made the comment that usually there's the Main Stage, a second stage, a third stage, and then that piece-of-shit record stage… Now what they're calling a second stage is at best a fourth stage and they're wondering why people aren't showing up."

He continued: "I think they waited too long and think all the talent that could have been on this took gigs in Europe. Because there's nobody here touring.

"It's easy to fill these stages, but I guess they wanted a different price point, take away the second and third stage which I think had a lot of value. To me, a second-stage headliner is ANTHRAX, MACHINE HEAD…"

King added: "Whoever booked this made a gigantic error."

JUNGLE ROT is one of the bands performing on the Victory Records Stage each night on Mayhem, and Matrise told Live Metal that he was not happy to read Kerry's comments about the lesser-known talent on this year's travelling festival.

"I'm gonna be truthful — I take it very personal," Matrise said. "I'm a longtime SLAYER fan, and I hate to say it, but now I'm gonna change my thoughts about SLAYER over this. It's because of the simple fact that there's a lot of people, including myself, and a lot of bands here that have a lot of money invested in this tour, and we're trying to make our money back, and we're trying to keep this thing rolling. And here's this guy, and he opens his mouth and sabotages the tour, in my opinion. And then he talks shit about Victory and that's our label as well, and calls it a 'shit stage.' Well, if it wasn't for Victory probably getting this stage, this tour would've never even happened."

He continued: "That's just my opinion, and if he would get off the bus once in a while instead of charging $20 for a picture or a signing or whatever the hell he does, he'd probably see that there's some really good talent out there, man. So yeah, I take it very personal. I think he stuck his foot in his mouth and I hope this turns on him and I hope for the worst. I have had enough — the guy's been runnin' his mouth enough and this is the final straw."

Asked if an altercation was possible given his strong stance on the issue, Matrise responded: "No, nothin' like that. Everyone's over it already, now we're just seein' what happens. All the band are sticking together, the crew's workin' hard — they're here at 6 a.m. in the morning. He just has to think before he talks."

He continued: "This stuff ain't easy, man. In livin' this lifestyle, touring is touring and he should know. He's been doing this for however many years.

"You take the punches when they roll, man, on every tour. Every tour is up and down like a roller coaster — they're all not gonna just be glamorous."

Matrise added: "It just don't make sense to me. He could've waited until he was done after the tour to open his mouth. It would've been much better. No one would've cared then."

This year's Rockstar Energy Drink Mayhem Festival — which features SLAYER in the headlining slot — kicked off on June 26 in Chula Vista, California and will wrap on August 2 in Dallas, Texas.

Mayhem co-founder Kevin Lyman told the Detroit Free Press about the festival's 2015 lineup, which also includes KING DIAMOND, HELLYEAH and THE DEVIL WEARS PRADA: "It was the best available for what we had to work with. We had pressure to keep the package at a certain price and make that work, and we had pressure on headliner expenses." In addition, there are fewer acts on the bill and only two stages this time around because "we had to condense it," Lyman said. "The expenses of putting on those shows had gotten high, so we had to push it all into the concourses. They [venues] don't want to build a fence outside [for third and fourth stages] anymore. Those things cost money."