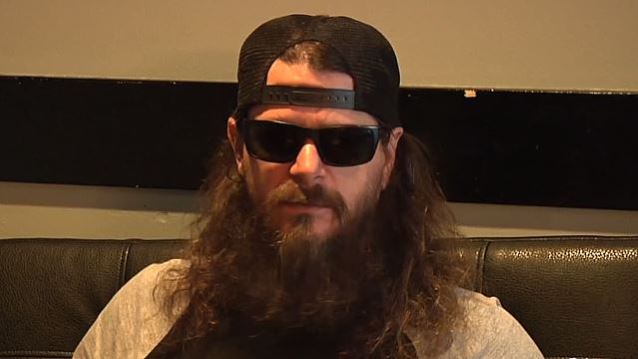 SLAYER's PAUL BOSTAPH: 'I Like To Buy The Music That I Listen To'

HollywoodChicago.com conducted an interview with SLAYER drummer Paul Bostaph at the July 12 stop of the Rockstar Energy Drink Mayhem Festival in Tinley Park, Illinois. You can now watch the chat below. A couple of excerpts follow (transcribed by BLABBERMOUTH.NET).

On the differences between drumming for SLAYER, EXODUS and TESTAMENT:

"With TESTAMENT, it's probably a bit more diverse in terms of thrashing. They still thrash, but not every song is, like, super, super… super, super thrash in terms of me being busy as as a drummer. It's more in-the-pocket thrash. No, that being said, they have Gene Hoglan playing drums for 'em now, and he's taken it way over the top. But with EXODUS, the challenge there was playing Tom Hunting's parts. Tom Hunting's one of the most underrated, legendary thrash metal drummers ever. Other guys have been getting way more credit than he gets, and that guy's probably one of the best, in my opinion. And his style is not an easy style to recreate at all. So playing with EXODUS, the challenge was trying to make it still sound like EXODUS and learn how to play like Tom Hunting, and that's not easy."

"I'm the kind of person who likes to get stuff for free, but I like to buy the music that I listen to, because the artist created it, and they took their time and effort to make it, and if I grab that music for free, then… I'm not stealing from 'em, but I'm not giving anything back for what they gave me. I think what it comes down to now is playing live, and I think that's a good thing. Because if you're a really good live band, people are gonna come see you. I mean, if a million people had our record but we didn't sell a million records, that's still a million people that, at one time or another, probably would come and see us play. Also, if you're great in the studio, but you suck live, that's probably gonna be a problem nowadays. But I don't think we have that problem."

SLAYER's new album, "Repentless", will be released on September 11 via Nuclear Blast. The CD's title track is now on sale digitally virtually everywhere, including on Amazon, iTunes and Google. The artwork was created by Brazilian artist Marcelo Vasco in collaboration with the band's Tom Araya and Kerry King.