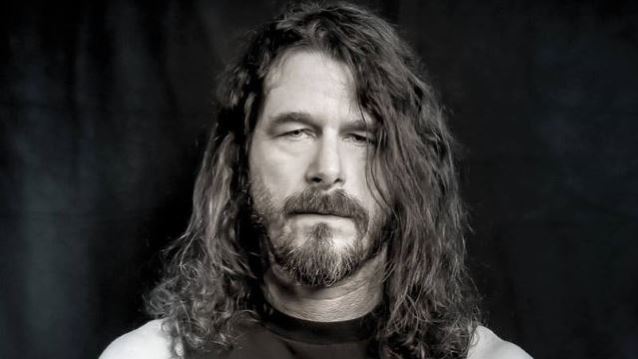 SLAYER's PAUL BOSTAPH: JEFF HANNEMAN 'Was There The Whole Time' During Recording Of 'Repentless'

"It was very hard and a constant reminder that we lost our friend," said Bostaph. "That being said, he was there the whole time. I always thought about Jeff as I recorded this album. There wasn't a moment where he wasn't on my mind. This performance meant a lot to me. His presence was there. We pushed through it without forgetting about our friend."

Asked if SLAYER thought about hanging it up after Hanneman's death, Bostaph said: "I can only speak for myself — I didn't know what was going to happen, but I never felt at any time, in my heart, that SLAYER would be done. I felt like Jeff wouldn't have wanted us to quit, because this was his band. Period. That being said, we have to carry on with honor. Nobody ever foresees losing a friend. When that happens, you have choices: you can give up or you can carry on, and that's what we're doing. Was it an easy decision to carry on? I don't think it was an easy decision, but here we are."

Bostaph also talked about his latest return to SLAYER in 2013 after previously leaving the group twice. He said: "I was with them for such a long time before — who we are, fundamentally, as people hasn't changed. Really, that's where you start with any relationship. It was like riding a bike again. My past experience gave me a real big advantage to know what to do [when in the studio.] I was able to draw from previous experiences with SLAYER and bring everything back again. There aren't any expectations [placed on you by SLAYER's Tom Araya or Kerry King]. Either you get it, or you don't."

Due on September 11, "Repentless" will mark SLAYER's first effort without both co Hanneman and original drummer Dave Lombardo, who was fired from the group in February 2013.