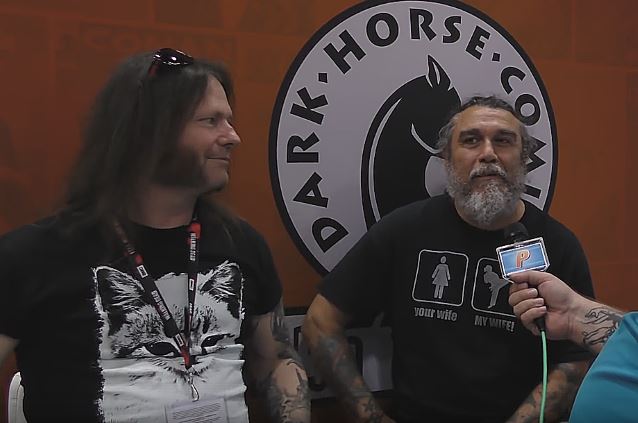 PREVIEWSworld's Big Rick conducted an interview with SLAYER bassist/vocalist Tom Araya and guitarist Gary Holt at the San Diego Comic-Con International on Friday, July 22. You can now watch the chat below.

Asked if he was a fan of comic books when he was younger, Tom responded: "I was a big fan of the magazine… MAD [humor] magazine. That's the closest I got to comics, was that. I was a big fan of that. I used to read and buy those a lot when I was younger. And then when I was really young, I was the owner of a 'Spider-Man' comic book. But that was it. It didn't really continue on to now, to what it is now."

As previously reported, SLAYER has teamed with comics publisher Dark Horse ("Sin City", "Hellboy") for a three-part title, the first of which, "Slayer: Repentless, Vol. 1", will come out later this year.

Asked how much input SLAYER had in the upcoming comic series, guitarist Kerry King told PopCultureMadness.com: "Just approval, really. I don't like taking power away from artists. It's like telling me how to write a song: 'I think your song should be like this' [or] 'No. I think your artwork should be like this.' I like people to do what they do, ['cause] that's why they do it. And if I don't like it, then add some direction. But I love the artwork. It's just cool to be able to have people like working for us."

"Slayer: Repentless, Vol. 1" will be on comic stands in December 2016. Pre-order at your local comic shop today.