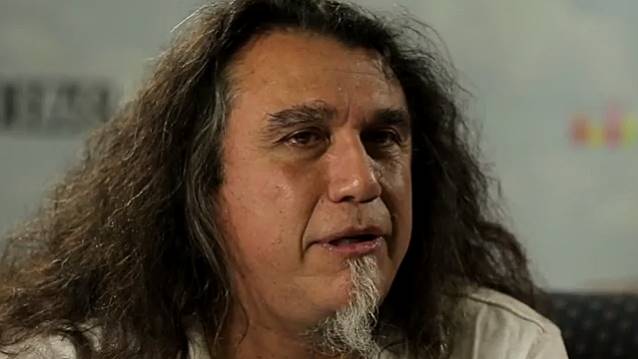 In a brand new interview with Kory Grow of Minneapolis City Pages, SLAYER bassist/vocalist Tom Araya was asked about the recent departure of the band's original drummer, Dave Lombardo.

"Dave left the band originally in '91 or '92," Tom said. "After that we brought in Jon Dette for two years and then we hooked up with Paul [Bostaph], who did four really great albums with us. Then he decided to move on. Our manager hooked us up with Dave again and when we were putting together [2006's] 'Christ Illusion', Dave offered to help out. We wanted to make things fair for him, so we offered him a contract with the band. Most recently, we were offered to tour Australia. When we were rehearsing, he seemed to do a 180 and said some things that kind of upset me and Kerry [King, SLAYER guitarist]. Kerry just looked at him and said, 'If you feel that way, then why are we even rehearsing for this tour?' So we wrote him a letter and said, 'Listen, we need to know if you're going to do the shows in Australia. If you're not, we need to do something about that.' We didn't get a reply. We were put in a position where we had to do something, so we got Jon Dette to play with us again. After what happened with the Australia tour, we made the decision to move forward and make him aware that we no longer needed his services. He was really upset about that. He wrote a rant on Facebook. He said some things that he shouldn't have. It really upset us. And it upset me. I was fuming. I couldn't believe that he would throw that out in the court of public opinion. After that, Jeff [Hanneman, recently deceased SLAYER guitarist], me and Kerry all got on the phone and talked about it. And Paul's name came up. It was a sure thing with Paul. He'd been in the band for over 12 years. So we gave him a call to see if he was interested and he was more than happy to. It was a no-brainer. He's an amazing drummer."

Araya was also asked about what SLAYER's future holds following the passing of Hanneman in May of this year.

"I don't know," Tom replied. "Before Jeff passed away, I had a different attitude about the band. There was hope that he would come back and be a part of what we were doing live. Not just necessarily recording, but live. And then after he passed, it's permanent now. He's not coming back. It made it more of a permanent thing. I've been doing a lot of thinking. And I've got to sit down with Kerry and share my thoughts with him and see how he feels. I don't even know how he feels. Everybody's moving forward and saying, 'We're gonna do this,' and, 'We're gonna do that.' And in all honesty, I really don't know how he feels. So the two of us are going to need to sit down and really go over how we feel about where we're at and how we move forward. So it's something I hope to accomplish before the tour's up. Because Jeff was not only a founding member, but he was such a big part of the band musically. He didn't say a lot and speak a lot, but his presence was felt."

On the topic of whether he is worried about how fans would accept a new official SLAYER guitarist, Tom said: "SLAYER fans are unforgiving. Early on in the career, if something changes, it's accepted. But 30 years down the road, in my opinion, they would rather see us do a three-piece than even try to replace Jeff, in a sense. SLAYER fans are pretty brutal. It's a question of how to move forward. Whatever we decide to do, the question is how we're going to move forward. It's up in the air, but that's where it is at the moment. Hopefully we'll have an answer for everybody at the end of this tour, so no one's left hanging."