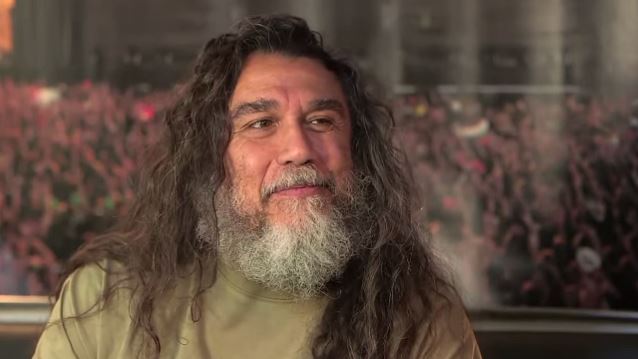 Joining guitarist Kerry King and bassist/vocalist Tom Araya in the studio for SLAYER's new album are returning drummer Paul Bostaph, who replaced Dave Lombardo last year, and guitarist Gary Holt (also of EXODUS),who has been filling in for Jeff Hanneman on tour for the past four and a half years.

Speaking to Jose Mangin, SiriusXM director of programming and on-air host (Liquid Metal, Ozzy's Boneyard, Octane),Araya stated about the progress of the recording sessions for the new CD: "We're just getting started, man. We're laying down drum tracks at the moment, but yeah, we're just getting started. I'd say we're two weeks into doing stuff."

Regarding the direction of the new SLAYER material, Araya said: "There's stuff that Kerry has been working on for the past almost two years, two and a half years.

"We started this whole process of writing a new album several years ago — three or four years ago — so it's been a long process; it's something that we've been doing for a while. So a lot of these songs have been around for a bit and now we're just trying to figure them out and make them good."

"We actually finished up a song that we're doing for somebody and we put that together in five days, and we went in and recorded it, we did all our parts, and then Terry mixed it and we presented it and it fuckin' sounds really heavy, man. [It] sounds awesome, sounds real fuckin' heavy."