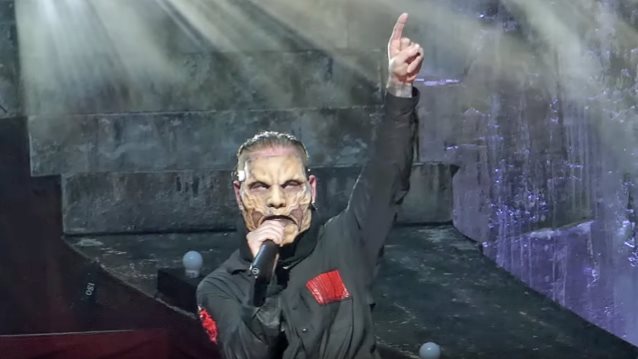 SLIPKNOT and STONE SOUR frontman Corey Taylor was among the first people Rolling Stone consulted when the magazine began work on its recently published list of the "100 Greatest Metal Albums Of All Time."

Taylor's list, which is sorted in alphabetical order, includes MAIDEN's "Somewhere In Time" album, featuring the song "Wasted Years", which he called "my fucking soundtrack for years, and I think it's probably one of the most perfect heavy metal songs ever written — just from a song standpoint, not riffage or anything like that. It's just so fucking catchy," he said. "And you can still put it on, to this day, for people who don't like heavy metal, and they'll dig it. It's just got a cool vibe to it."

Another classic LP on Corey's list is JUDAS PRIEST's "Screaming For Vengeance", which he said was "the perfect fucking power-metal album, outside of the stuff that IRON MAIDEN was doing, to my ears. 'Screaming For Vengeance' was just so fucking dope, dude. Whether it was the opening with 'The Hellion' right into 'Electric Eye', or going into 'You've Got Another Thing Coming', the whole fucking album is amazing. And the title track is ridiculous. Just hearing those fucking [screams], that crazy shit coming out of your fucking speakers. I was like, 'What? Should I be listening to this, man?' But it was such a great album and it really showed their evolution, just how fucking amazing that band is."

Unsurprisingly, Taylor selected METALLICA's "Master Of Puppets" as one of his favorites, saying that the 1986 album is "heavy and yet it's so fucking melodic. It is badass and yet it has moments of pure fucking contemplative cool flow stuff. It is sludgy and yet will rip your fucking head off. And it has the best METALLICA song ever written, 'Disposable Heroes', on it. That fucking song is a clinic, not only in alternate picking, but also down picking. I can't play it, and I can play almost anything. That's how good it is." [The LP has] got some of James [Hetfield's] best performances, and the whole band is amazing on it. And it's got some of his best lyrics on it. You listen to it and you're like, "This is criminal, how fucking good this album is."

Taylor also picked two albums that arguably directly shaped SLIPKNOT's sound prior to the recording of the band's self-titled 1999 debut: KORN's first effort and SEPULTURA's "Roots". "To me, I would put 'Korn' on the same level as [GUNS N' ROSES'] 'Appetite [For Destruction]' and [NIRVANA's] 'Nevermind' as far as albums that shifted things culturally," Taylor said. "It's just one of those 'Where the fuck did this band come from?' kind of moments."

As for "Roots", Corey said: "That album… Jesus Christ. I mean, besides [SLIPKNOT's] 'Iowa', that album is probably one of the thickest-sounding, heaviest-sounding albums that I've ever heard, from a production standpoint. It's so gross and yet so fucking awesome. You can almost hear the hair on it. [Laughs]."