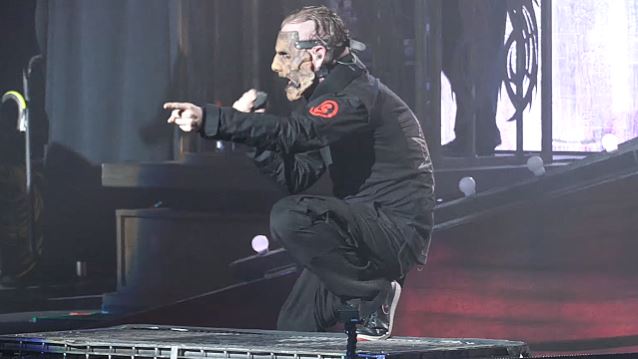 In a brand new interview with Ticketmaster, SLIPKNOT frontman Corey Taylor was asked what the last show was that he saw as a fan that absolutely blew him away. He responded: "My wife works in management, so we don't really go to a lot of shows, because we're almost always on the road. But there have been a couple of times where we just say, 'Screw it, we're getting dressed up and we're going out.'

"One of the best concerts I've ever seen was when we saw Lionel Richie at The Colosseum in Vegas. We have a house there and happened to be in town on one of his two-week runs. We were losing our minds. From his performance to the audience participation, the laughter — it was just such a great vibe. It made me very, very envious, and I was, like, 'Man, I can't wait to get back on the road!'

"Sometimes you'll go see bands play and you can just tell — I shudder to say 'going through the motions' — but you can just tell that something's off. But it's very refreshing to see an artist that after all those years, he still puts on a show. And I will go and see him again no matter where he's playing."

Taylor has consistently expressed his appreciation for other styles of music, telling one interviewer several years ago: "I had a kid ask me the other night, 'What kind of music is your guilty pleasure?' I said I don’t have any. I don't feel guilty about the music I love. If you feel guilty about something you dig, then you should stop feeling guilty about it. One of my favorite albums to this day is the tenth anniversary ensemble cast of 'Les Miserables', the ultimate cast recording, and it is still something I love listening to top to bottom."

SLIPKNOT was forced to postpone its North American trek with MARILYN MANSON by three weeks after Taylor underwent what he described as "an unplanned spinal surgery."