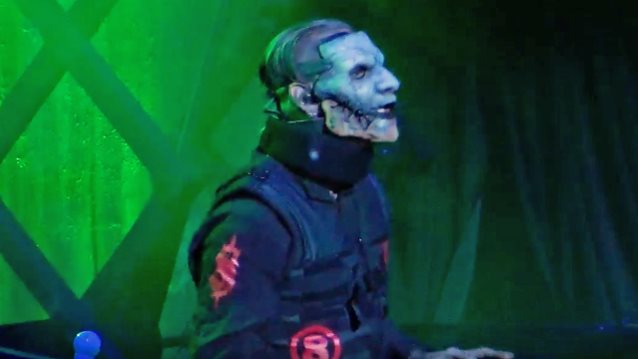 Meltdown of the WRIF radio station in Detroit, Michigan recently conducted an interview with SLIPKNOT and STONE SOUR singer Corey Taylor. You can now listen to the chat using the audio player below. A couple of excerpts follow (transcribed by BLABBERMOUTH.NET).

On the upcoming STONE SOUR album:

Corey: "We have eighteen songs demoed. It's the best material we've ever written. This album, the next STONE SOUR one, is going to eat people; it's so good."

On how STONE SOUR will follow the ambitious "House Of Gold & Bones" double-album packaging, which, when put together, formed the shape of a house:

Corey: "[We're] just going back to basics. I'm an old-school guy. I think most of us are. The thing that I loved about those great albums is that you would get it and you would wanna study everything. So I'm gonna try to meld that world with the electronic world and see if those two can kind of coalesce and coexist. We're getting art together already; we're starting to really get stuff together — like, really see the vision of it — and just put together just a kick-ass rock and roll album. A little heavy, a little rock, a little punk, soft stuff in there… It's gonna destroy people."

On why he doesn't appear on the first radio version of his recent collaboration with Zakk Wylde on the BLACK LABEL SOCIETY frontman's song "Sleeping Dogs" from the "Book Of Shadows II" album:

Corey: "It was weird. 'Cause they wanted to go with it as a single, and my record company, my record label, was worried about them going right away, because they didn't want it to clash with one of my songs. It's so stupid, the politics, man. I was, like, 'C'mon! It's a killer tune!' If it wasn't, I wouldn't have done it, especially being friends with Zakk. So it was just one of those things where they kind of had to hold it back. They did a version without me that… it was actually the one that I heard, that Zakk sent to me. He was just, like, 'I want you to sing on that.' I was, like, 'Yeah! Goddamn it!' So, either way, it sounds great. It's such a great song. And it really represents everything about him that you love, especially that tune. It's got that somber, almost like an ALLMAN BROTHERS vibe to it. And plus, he's just shredding like crazy. And he's such a great singer, too, so it was really cool to be on that."

On the emergency spinal surgery he was forced to undergo in early June, when it was discovered in the course of a routine physical that he had been walking around for years with a broken neck:

Corey: "I can't really go back to the gym yet, so there's only limited stuff that I can do. You know, it's a process. It's still less than two months ago that I had the surgery, so that kind of puts it in perspective just how quick I came back out. I'm still not convinced it was the best idea [to go back out on the road so soon], but every day is a little better. My symptoms kind of come and go, but you just deal with it. I'm glad I had the surgery, and I'm getting through it. It's not hampering my show. If anything, it's really making me take a look at what I kind of took for granted, and just enjoying the shows for what they are. Before, I could go to my standbys, which was headbanging like crazy and jumping my ass off, and now I can't do either of those. I'm not supposed to do any running around… I do the Ozzy shuffle, where you kind of go east and west, which is awesome. It's weird. It's kind of a different show, but I tell you what… Especially since I quit smoking, I sound great… To me, I feel like I sound great. My voice is stronger. I'm just kind of doing little stuff here and there to just kind of up the ante and just do a different show."