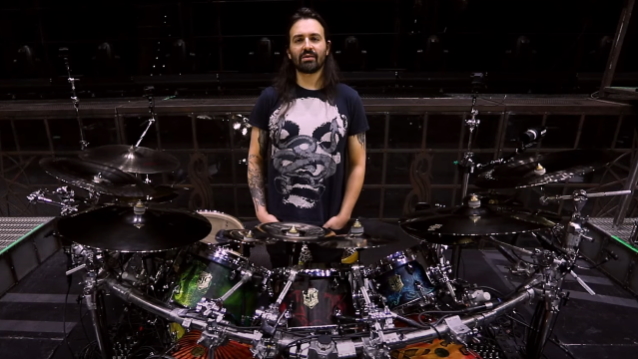 SLIPKNOT's Jay Weinberg recently gave a "rig tour" to Sweetwater of his SJC custom kit, sporting his signature snare alongside a wealth of cymbals from Zildjian. Check it out below.

On July 7 at Rampart Studios Gallery (2520 Sunset Blvd.) in Los Angeles, Weinberg be displaying a collection of oil paintings for the first time since he began this body of work eight years ago.

Jay said: "'A Hollow Realm' is a body of work that contains 14 paintings I've made over the last eight years. Whether set within the beauty of the natural world, or in complete darkness, each painting's subject tells a part of a personal narrative that explores themes of connection and isolation. The visceral emotions of vulnerability, comfort, lust, and anxiety. Love found and love lost. Others explore the mysterious connection to nature I've felt since an early age, wandering amongst the trees and streams in the backwoods of rural New Jersey.

"Each piece took between 30 and 100 hours to complete and serves as a touchstone of this methodical practice in understanding and moving beyond the emotional turning points of my life that have led me to where I am today.

"It's a pleasure to finally share these works with you. Please join us on July 7th in Los Angeles for the physical exhibition of this body of work.

"AND — for those who *can't* attend the physical show…don't worry. @opticnerve_io and I are preparing a virtual environment where you'll be able to partake in the festivities from anywhere in the world. More on that soon…"