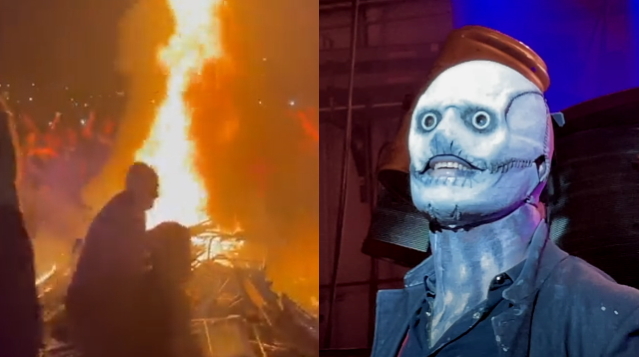 SLIPKNOT's concert in Phoenix, Arizona Tuesday night (November 2) was briefly disrupted after a bonfire was started in the mosh pit.

The band was performing at the Ak-Chin Pavilion as part of SLIPKNOT's "Knotfest Roadshow" when the fire began shooting up in the air, with the scene captured in various social media posts from fans who attended the concert.

Just minutes earlier, the crowd sang "Happy Birthday" to guitarist Mick Thomson, who is turning 48 years old on Wednesday, before SLIPKNOT launched into "All Out Life". As a result of the delay, SLIPKNOT was reportedly forced to drop "Duality" and "Spit It Out" from its set.

John Marshall, a journalist who was at the show said a fire truck was "outside the gate" as he exited the venue.

The "Knotfest Roadshow" tour, featuring support from KILLSWITCH ENGAGE, FEVER 333 and CODE ORANGE, kicked off following SLIPKNOT's Knotfest Iowa hometown show in Des Moines on September 25, and will wrap up at Knotfest Los Angeles on November 5 at Banc Of California Stadium.

Back in November 2019, a "security issue" caused the cancelation of SLIPKNOT's's appearance at the Knotfest Meets Forcefest in Mexico City. According to reports, the stage barricade broke during BEHEMOTH's set and it was impossible to fix it in time for either of the two scheduled closers — SLIPKNOT and EVANESCENCE — to perform.