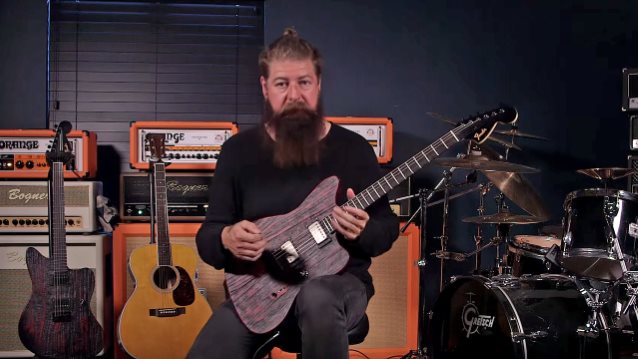 SLIPKNOT's JIM ROOT On His Disk Replacement Surgery: 'It Got To The Point Where I Couldn't Ignore It Anymore'

SLIPKNOT guitarist Jim Root was interviewed on a recent installment of HATEBREED frontman Jamey Jasta's official podcast, "The Jasta Show". You can now listen to the chat using the SoundCloud widget below.

Speaking about his recent disk replacement surgery, Root said: "What happened was I had this really sharp pain in my shoulder blade for, like, two and a half, three months. It just would not go away. And it was starting to freak me out; like, this is bad. And that evolved into my left arm kind of going numb a lot. And it just got to the point where I couldn't ignore it anymore and I went and got an MRI. And I think it might have been the same thing Tom Araya [SLAYER frontman] had and I think it's exactly the same thing that Corey [Taylor, SLIPKNOT singer] went through just previous, so I went to the same doctor that he went to. And they gave me the MRI, and before I even got a block away from the appointment, [the doctor] called me up and he was, like, 'You need surgery as soon as possible.' And I'm, like, 'I'm leaving in three days to start a two-week tour and then I have literally two weeks off and then we've gotta start another month of touring that's all flying. It's all Mexico and South America and New Zealand and Australia and Taipei [and] Japan. It's, like, I don't have time to recuperate from something like this.' And he was, like, 'Well, you have to do it, because you've got two blown-out disks in your neck. We need to replace C5 through C7 in your neck. It's causing nerve damage, and the longer you let it go, the nerve damage could become permanent.' Then that gives me anxiety and I start freaking out about it. But even more than that, I'm, like, 'Does that mean I'm not gonna be able to bang my head anymore?' 'Cause, I mean, it's muscle memory. After seventeen years-plus of playing guitar a certain way on stage, it's hard to not do that. So especially right after that tour, I had to kind of rethink the way I was on stage, but hopefully it'll get to the point where I'll be able to do that again. They didn't infuse [the disks]; they actually replaced them. I had it about two or three months ago, and it's kind of been bugging me just where the surgery actually was. And there's still a little bit of pain in my nerves, 'cause he said now my nerves are swollen and the paths that they go through, through my bones and vertebrae, it's gonna hurt for a while. But pretty much I'd say I'm ninety percent now."

Root also discussed the songwriting process for SLIPKNOT's last album, 2014's ".5: The Gray Chapter", and where the band might go on the follow-up effort. He said: "Already I think it's a little bit more obviously guitar-oriented since it's not being written by a drummer [former SLIPKNOT drummer Joey Jordison] and bass player [late SLIPKNOT bassist Paul Gray], for the most part. And I can only write the way I can write, and I do my best. But I've really gotta detach myself from everything and try to pull from the energy of Mr. Gray and try to think about where his mind might go and the things he might do, and go back to when we were splitting hotel rooms up and think about the way we were back and all that, and that's kind of where I draw my inspiration from when I write. But that was then, that was that last record we did."

He continued: "I don't know how to even begin to approach the next stuff that we're gonna start working on. I definitely think a lot more of the members need to be a lot more involved; I think it'll be a lot cooler that way. And Clown [percussionist Shawn Crahan] has different ideas on what he wants to do, and I don't know what Corey wants to do; I never know what he wants to do. But I've always wanted to get a little bit more experimental with music, but it's so hard. Everybody says, 'We need to do like a RADIOHEAD metal album or whatever, PINK FLOYD meets…', everybody says they wanna do that. And that's cool and everything. I mean, I think as long as you catch a vibe and everything's very organic, then it doesn't really matter. I don't like to try to put, like, 'Let's do this type of record,' 'cause it never turns out that way anyways."

With SLIPKNOT closing out the touring cycle for ".5: The Gray Chapter", Taylor will be regrouping with his other band, STONE SOUR, to record a new set in early 2017.

Crahan, meanwhile, is pursuing a career as a feature film director. His first effort, "Officer Downe", arrived in theaters and on-demand platforms on November 18.