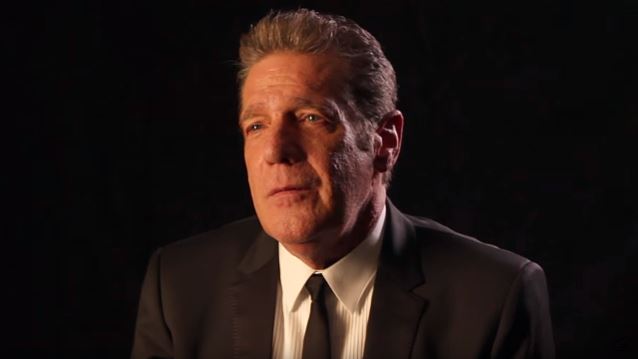 Members of SLIPKNOT, MÖTLEY CRÜE, JUDAS PRIEST, STRYPER, QUEENSRŸCHE, NONPOINT and NICKELBACK are among the rock musicians and scores of other artists who reacted on social media to the passing of EAGLES guitarist Glenn Frey, who died earlier today (Monday, January 18) at the age of 67.

The surviving members of EAGLES posted a statement on their Facebook page citing "complications from rheumatoid arthritis, acute ulcerative colitis and pneumonia" as the causes of Frey's death.

"Words can neither describe our sorrow, nor our love and respect for all that he has given to us, his family, the music community & millions of fans worldwide," said the statement.

EAGLES were forced to pull out of attending the Kennedy Center Honors ceremony last November because Frey required major surgery.

Frey's longtime EAGLES collaborator Don Henley said in a separate statement: "We were family, and like most families, there was some dysfunction. But, the bond we forged 45 years ago was never broken, even during the 14 years that the EAGLES were dissolved. Glenn was the one who started it all. He was the spark plug, the man with the plan. He had an encyclopedic knowledge of popular music and a work ethic that wouldn't quit. He was funny, bullheaded, mercurial, generous, deeply talented and driven."

EAGLES' first best-of collection, "Their Greatest Hits 1971-1975", is among the best-selling albums of all time, having sold more than 26 million copies. It was the first album to be certified platinum (one million sold) by the Recording Industry Association Of America, which introduced that classification in 1976.

SHOCKED to report the death of GLENN FREY. Eagle & brilliant songwriter. We shared some memories at RRHOF. Shocked.. pic.twitter.com/0uVYgaKVIT

RIP brother Frey. Take it easy my friend and thanks for everything X pic.twitter.com/o5ftB0KeTX

This year is pissing me off. #RIPGlennFrey

Another legend is gone, but your music will live on forever. Our condolences to Glen's family, friends and fans.... https://t.co/ZRoUKWeP8i

When I lived in Phoenix, the desert drives to LA or Vegas were never complete without an Eagles album. Thank you Glenn Frey. RIP

R.I.P. Glen Frey....Thank you for all the great songs and powerful lyrics...Jesus can the reaper please take break for awhile.....

I swear to God all this #DeathofRockNRoll makes me feel like Ive been hit by a truck. Just want to curl up in a ball & pretend it's not true

And, as much as I hate to say it , making me quite fucking sad https://t.co/1uyxlPwe3y

So sad to see your childhood music heroes pass on. Goodbye Glenn Frey - @The_Eagles were one of my favorite groups growing up. RIP my friend

Rip Mr Frey. Thank you for the incredible music. pic.twitter.com/k5fk4vTFwi

Another legend is gone. #RIPGlennFrey

Will everyone please stop dying

We are saddened to have lost this guy today. Another legend gone. @GlennFreypic.twitter.com/mmWllEnz1v

Are u kidding me??? Death can you please chill out for awhile!?! Take it easy Glenn....… https://t.co/b4EpdwjZWj

Mr. Glenn Frey, thank you for your contributions to one of the best bands in history. Godspeed

I can't believe it's only been 24 hrs and I'm posting this again....#RIPGlennFrey https://t.co/FB0xVLxacb