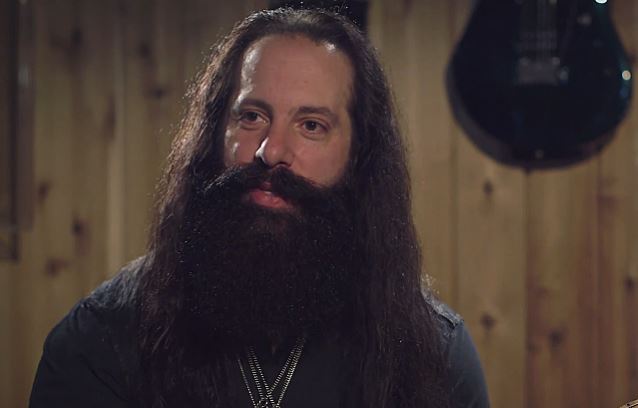 DREAM THEATER's JOHN PETRUCCI On 'The Astonishing': 'The Concept Right From The Beginning Was To Do Something Big'

Phil Simon of The Huffington Post recently conducted an interview with guitarist John Petrucci of progressive metal giants DREAM THEATER. You can now listen to the chat at this location. A few excerpts follow (transcribed by BLABBERMOUTH.NET).

On the inspiration for DREAM THEATER's new concept album, "The Astonishing":

Petrucci: "This album has been, really, our biggest undertaking to date as a band. In fact, the inception was really about two and a half years ago. And it started with a single musical idea, but, really, for the most part, it does center around a story that I began at that time that we based all of the music and concept off. So the inspiration really came at that point and from the story, and Jordan [Rudess, keyboards] and I wrote the music as a score to the story. So it was a very different process all around. And we kind of thought beyond just the album. Right from the beginning, we talked about all the various incarnations of this — the story, the two-act album, presenting this as a standalone live show, and then even other things beyond that that it can turn into, whether it be a book or a game or a movie, etc. So it's been a really all-encompassing experience and project. It's been a lot of fun and a ton of work, for sure, but I'm really proud of it."

On whether the storyline of "The Astonishing" reflects his belief that there might be a little bit too much technology in the world today:

Petrucci: "Well, you know, it's happening in all other areas — with jobs that people once held in manufacturing and everything else, they're automated now. And it's actually going into even things that you couldn't have imagined. There's already self-driving cars that they're experimenting with. Pretty soon, we'll be looking back, like, 'Oh, remember when you used to have to drive yourself?' So I just kind of… Being a musician, and since music is such an important part of my life and people that surround me, I knew that music had to be a central theme. That with all the advances in technology, how music becomes less and less important and just really easy to stream and quickly listen to a song and make something up on your phone, or whatever it is. As the importance kind of went away, I thought it would be really crazy and a travesty if people didn't make music or didn't participate in the arts anymore and it was all artificial; it was all done by machines. So that's what this dystopian future in my story… that's the setting of the story. It's about three hundred years into the future and people don't make music anymore; it's done by machines."

On whether it was DREAM THEATER's intention from the beginning to make a huge statement with "The Astonishing":

Petrucci: "Yeah, the concept right from the beginning was to do something big. Like I said, to make this cross different mediums and to be not only about the music but about the story, about the visuals, about the lyrics, about the live show and about any other thing that it could turn into. That was the intention from the beginning. And so it did take a lot of planning, a lot of thought. And it's actually still in development and there are still things that we're working on and we will continue to be over the next couple of years, for sure."

On DREAM THEATER frontman James LaBrie singing as different characters on "The Astonishing":

Petrucci: "First of all, he did such a phenomenal job. I mean, this is his tour de force; vocally, I think this is his greatest work to date. He had a major challenge in front of him to interpret and sing the parts of almost eight different characters on the album, and he just did a spectacular job. I wrote the story and I wrote the lyrics, so that sometimes is challenging, because, as a vocalist, he needs to interpret what somebody else wrote, which is a big enough challenge in itself. But then he had to kind of embody all these different characters. And I'd given him some direction in the beginning before he went into the studio with our engineer, Richard Chycki, up in Canada, with just the two of them. I gave him direction as far as, 'I think this character should sound like this,' and, 'This one should sound like this,' and, 'In my mind, this person's voice is such and such.' And he took those notes and then went in and figured out these characters and experimented and did all that up with Rich, and then they would send me stuff back and I would comment. But all that is coming from his interpretive mind as a singer. And I told him this, and I truly believe it, I don't think there's any other singer in the world that could have been able to do what he did in that fashion. It's such a strong display of his abilities and creativity as a vocalist. I really love the job he did."

On whether it was the right time for drummer Mike Mangini to take part in the writing process for such an ambitious project as "The Astonishing":

Petrucci: "We had talked about doing another concept album a few years ago, and it was a matter of the timing needing to be right, not only to make sure that the band was in the right place to be able to do it, especially after Mike joining, but also me thinking that if we're gonna do something this all-encompassing that there needs to be a substantive story first, and that's an undertaking in itself; that takes time to write and to come up with all of the plotlines and characters and names and places is a big undertaking in itself. So the timing did feel really, really perfect to do this. And Mike, again, I can't say enough great things about him as a drummer and his contributions to this. Jordan and I wrote the music, and we had created these demos that didn't have any drums, and he came in and interpreted and came up with these drum parts and just was… He was doing that before the vocals were recorded, so his actual instinctual choices on the drums ended up making so much sense once the vocals were in, which is really, really hard to do, as far as recording drums. So he, again, did a phenomenal job."

On the risk of performing "The Astonishing" in its entirety and, essentially, ignoring the band's back catalogue on DREAM THEATER's upcoming tour:

Petrucci: "Yeah, there's a definitely a risk with that. We have been touring for a long time — we have been a band for over thirty years — and we've done 'An Evening With' tours, we've opened for other bands, we've done big things with IRON MAIDEN and YES, we've played massive festivals, we've all done the different incarnations and we've played in all different types of places — in ice-hockey arenas, in concert halls and theaters and big rooms and outside, and you name it. But this time, you know, I wanted to do things different. Instead of doing that, I thought, let's book this tour in all really nice, prestigious, sit-down concert halls and venues all over the world where we can sit there and, in some instances, as in Europe, for two or three nights in the major cities and have a special event that people can come to and sit down and enjoy this. We'll be at the Radio City Music Hall in [New York City] in April; another example of just a great venue to watch a show like this. And then the second part was, we've done the mixed setlists and bests-of and all those types of things, so let's do something different. Yes, it is risky to play only new music, but at the same time, this concept and the music, I think, will best be suited for a night where you can see and hear the entire thing, just like you'd be watching an opera or a musical or a movie or something like that. And we kind of stole a page from PINK FLOYD's book, the way they toured with 'The Wall'. 'The Wall' was just PINK FLOYD plays 'The Wall' live. So this tour is DREAM THEATER presents 'The Astonishing' live. And we've been really upfront with our fans and the way the tour has been promoted and booked, so they know that this is what they're coming to see. And I think it's gonna be really cool. I think it's the best way to do it. If [only] two people show up, then we'll know that it was too much of a risk, but I don't think that's gonna happen. I think that this is gonna be a really, really special tour — something different, something interesting for us, cool venues and a very cool visual show as well."

DREAM THEATER's first North American tour of 2016 will see the pioneering group performing a historic set in immersive and interactive settings for a unique and unparalleled live experience. Set to kick off April 14 at Quebec City’s Theatre Du Capitole, the spring trek will see the prog virtuosos delivering a one-of-a-kind show in which they will perform "The Astonishing" live in its entirety. The momentous tour will continue through May with the band making stops at prestigious theaters throughout North America including New York's Radio City Music Hall, Los Angeles's The Wiltern, and Boston's Orpheum Theatre.