DJ Sid Wilson (#0) of SLIPKNOT broke both of his heels at the first show of the Rockstar Energy Mayhem Festival on July 9 in Auburn, Washington and has been forced to wear casts on both legs. He apparently jumped off one of the stages in the background of SLIPKNOT's stage set and landed incorrectly. Despite having casts on both legs, Sid has vowed to play all shows on the Rockstar Energy tour, even if it means getting around in a wheelchair, as was the case at last night's (Saturday, July 12) concert in Mountain View, California (pictures by Burningpoop).

Fan-filmed video footage of SLIPKNOT performing its new single, "Psychosocial", live for the first time ever this past Wednesday night (July 9) at the White River Amphitheatre in Auburn, Washington can be viewed below (clip uploaded by YouTube user "skudave").

SLIPKNOT's new album, "All Hope Is Gone", will arrive on August 26 via Roadrunner Records. The title track was made available last month, while "Psychosocial" arrived at rock radio on June 30. 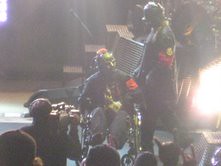 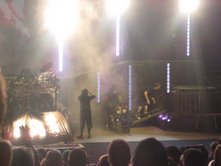