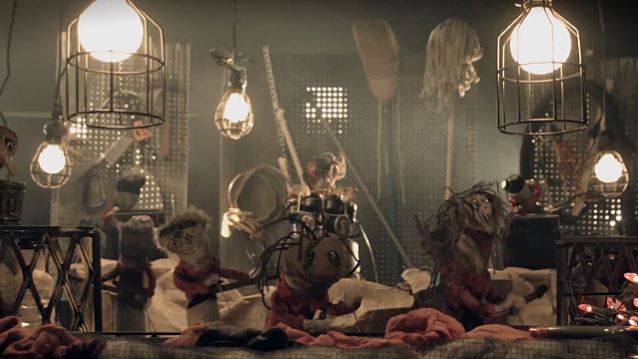 Sock Puppet Parody, which pays tribute to iconic bands and glorifies their undergarments, has posted a video for the sock-puppet act SOCKNOT's song "Wait In Bleach" which hilariously parodies SLIPKNOT's "Wait And Bleed". Check it out below.

States a press release: "When socks are used as rags, they're liable to go insane. These socks have reached their tearing point. Now they've snapped and formed the ultimate garage band, SOCKNOT! The band is made up of misfit socks that have been all but used up. Frayed by the constant abuse, they have channeled that insanity into their hit single, 'Wait And Bleach'. This mosh pit of insanity hits you like a washboard and doesn't let up."

Sock Puppet Parody previously released a video for the song "Master Of Sock Puppets" which was based on METALLICA's classic 1986 track "Master Of Puppets".

"Wait And Bleed" appeared on SLIPKNOT's self-titled 1999 debut album. The song was remixed with more prominent clean-sung vocals, and released as the lead single from the CD in July 1999. The cut peaked at number 34 on the American Billboard Hot Mainstream Rock Tracks chart.

"Wait And Bleed" was nominated for a Grammy Award in 2001 for "Best Metal Performance".