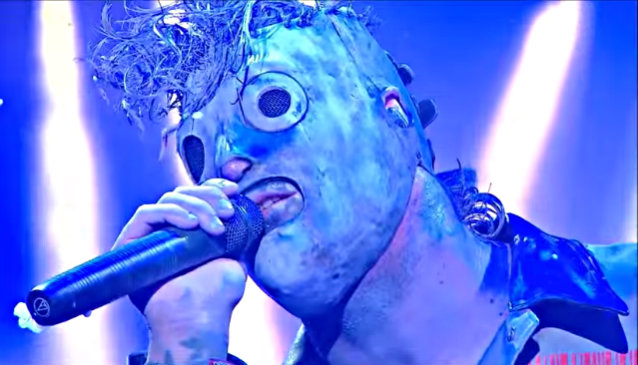 SLIPKNOT's COREY TAYLOR: '.5: The Gray Chapter' Is 'Moody', 'Artistic' And 'Heavy As Hell'

Sid Black of the 94.3 KILO radio station in Colorado Springs, Colorado has just conducted an interview with SLIPKNOT frontman Corey Taylor. You can now listen to the chat in two parts below. A couple of excerpts follow (transcribed by BLABBERMOUTH.NET).

On SLIPKNOT's touring plans in support of the band's fifth studio album, ".5: The Gray Chapter", which will arrive on October 21 via Roadrunner:

Taylor: "We have huge — huge — plans for next year. And we're definitely gonna tour the world. We're gonna tour the States at least three times on this tour — at least three times. We're gonna really try and hit all of the cities that we've played before, all of the cities we've never played before, and really try and just cover the planet."

Taylor: "As excited as the fans are, I am just as excited, if not more excited, to get this album out, so people can hear it. It is a fantastic piece of work. I'm really proud of it. I love the music. I haven't stopped listening to it since we started recording it — this is going all the way back to the demos, man. And I just love what we've been able to do. It's dark, it's moody, it's artistic, it's heavy as hell. There's some brutal screams on it, but there's also huge melodies on it. I can't tell you how stoked I am that we were able to pull this off, man. Especially, just from a personal point of view, telling the story that we need to tell, which is essentially the last four years, and everything that we've gone through since losing Paul [Gray, bass]. This album was too important to rush in and do, and I'm glad we took our time and really made sure that it was time to make it when we did. And the proof's in the pudding, man. I can't wait for people to hear it."

On whether the new album is a full-on lyrical tribute to Paul Gray or a record that was just made in legacy and in honor of Gray:

Taylor: "Oh, it's both. It's definitely both. There's a handful of songs on the album that are about Paul. There's a bunch of songs just about the band and everything that we've been through in the last four years, all the emotions that we've had to deal with, the reaction from the world. I mean, it really kind of covers the bases, as far as what this band has been through. A lot of people have no idea what it's been like. You don't understand it. So for us, for me, especially, as a lyricist, being able to tell the story and tell it as honestly and as darkly as I've been able to, I'm stoked for people to hear it."

On SLIPKNOT's ups and downs leading up to the release of the new album:

Taylor: "We've been doing this now… The first album came out in 1999; that's 15 years ago. I joined in '97, so that's 17 years ago, and the band was started in '95, so next year's gonna be the 20-year anniversary. So to be able to really kind of keep this going and to keep at the level of exceptionalism and creativity and intensity and musicianship — everything, everything firing as hard as it can — I'm really proud to be in this band, man. I'm proud of everyone in this band. I'm proud of what we've been able to create. Yeah, it just feels really good. It feels like everything's going really well for us right now, which is good, because the last four years have been really hard. It's about time for us to have some light at the end of the tunnel, so we're really looking forward to everybody hearing the new stuff."

Taylor: "People are gonna get their first real look at the new masks coming up in the 'The Devil In I' video. Some of them have changed in subtle ways, and others, like myself, my mask changes drastically from album to album, because for me, the mask is a representation of what's going on for me spiritually, emotionally, artistically… just everything in my life. Just changing… Everything evolves. It's about an evolution of what's coming next. So, yeah, people are gonna get a lot when they see this video, and it's gonna blow their minds."

".5: The Gray Chapter" features 14 tracks for the record plus two bonus cuts, including "Sarcastrophe", "Killpop", "The One Who Kills The Least", "Be Prepared For Hell", "Nomadic", "Lech" and more.

Yet to be revealed is the identity of the band's new drummer although reports have suggested that SLIPKNOT has recruited Jay Weinberg to play on the new album and tour. Weinberg is the son of Max Weinberg, longtime Bruce Springsteen and the E STREET BAND drummer. There are also rumors that SLIPKNOT is no longer working with Donnie Steele, the group's original guitar player who has been playing bass for SLIPKNOT since the band resumed touring in 2011.

The second edition of SLIPKNOT's Knotfest event will take place on October 24-26 in San Bernardino, California. More than two dozen acts will join the headliners, including FIVE FINGER DEATH PUNCH, VOLBEAT, OF MICE & MEN, IN THIS MOMENT, HELLYEAH, ATREYU and many others.

Support on SLIPKNOT's "Prepare For Hell Tour" will come from KORN and KING 810.