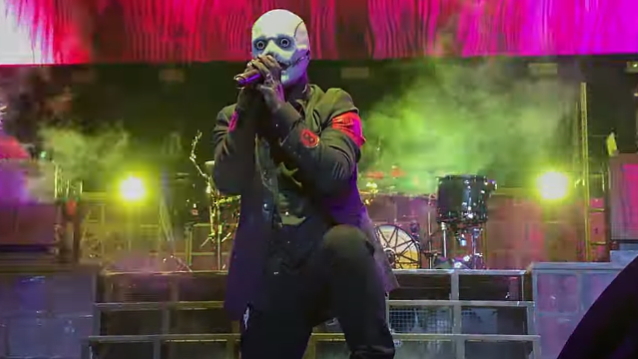 The rapper's November 5 set at his Astroworld event left nine people dead and several more fighting for their lives. Since then, dozens of lawsuits have been filed and a slew of questions remain unanswered about what went wrong.

Prior to launching into the song "Wait And Bleed" during SLIPKNOT's Welcome To Rockville performance, Taylor brought up the Astroworld tragedy, telling the audience: "I'm not gonna bring everything down but I feel like it needs to be said. One of the wonderful things about this genre, about this audience, about this family is that we look out for one another. This is supposed to be a place of celebration, of love and about looking out for one another. And everybody that's ever been in a fucking mosh pit knows: if somebody goes down, you get 'em right the fuck back up. So I want you all to hold on to the memory of those eight souls that we lost. But I also want you to remember this: no matter what show you go to, if you've got eyes, you keep 'em open, you keep 'em focused and you look out for another."

SLIPKNOT made headlines earlier in the month when a bonfire was started in the mosh pit at the band's concert in Phoenix, Arizona. SLIPKNOT was performing at the Ak-Chin Pavilion as part of its "Knotfest Roadshow" when attendees set fire to a stack of lawn chairs, with the scene captured in various social media posts from fans who attended the concert. As a result, SLIPKNOT's performance was stopped for roughly 30 minutes in order to allow the fire department to put out the blaze. Due to the delay, SLIPKNOT was reportedly forced to drop "Duality" and "Spit It Out" from its set.

The "Knotfest Roadshow" tour, featuring support from KILLSWITCH ENGAGE, FEVER 333 and CODE ORANGE, kicked off following SLIPKNOT's Knotfest Iowa hometown show in Des Moines on September 25. It wrapped up at Knotfest Los Angeles on November 5 at Banc Of California Stadium.