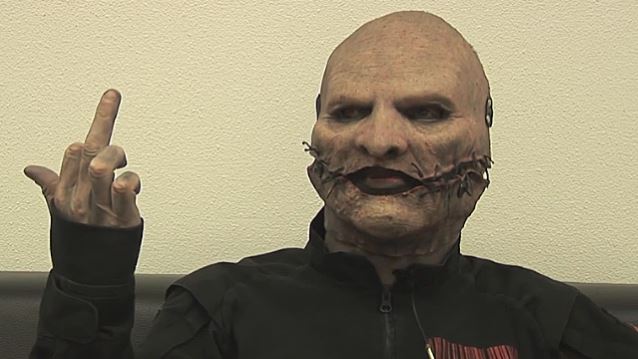 SLIPKNOT's COREY TAYLOR: I Do My Best To Make Sure My Bandmates Know How Much I Appreciate Them

On February 1, FaceCulture conducted an interview with SLIPKNOT singer Corey Taylor in Amsterdam, The Netherlands. You can now watch the chat in three parts below.

Asked about the lyrical themes on ".5: The Gray Chapter", which was SLIPKNOT's first studio album following the tragic 2010 death of the band's bassist, Paul Gray, Taylor said: "One of the main themes [on the CD] — and I hope I've put this one there — is that you can't take anything for granted. Somebody you love could be gone [snaps fingers] that quick, and you'll never get another chance to tell them you love them. And that's difficult, especially when we, as humans, are so selfish. It's hard to have that kind of openness now. Especially in this day and age, when everyone is so 'me, me, me, me, me,' it's hard to imagine anything like that being taken away from you. And, unfortunately, until you've lived that, you'll never understand it. Fortunately — and maybe this is one of the only positive things to come from such a tragedy like that — it's made me appreciate everyone in this band, and I try to do my best to make sure that they all know how much I appreciate them every day."

"Custer" is the latest single from ".5: The Gray Chapter", which came out in October.