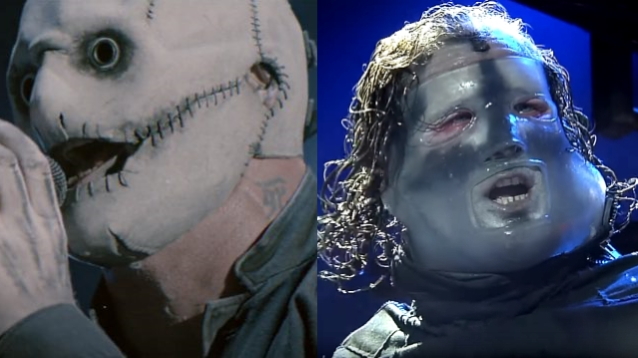 During an appearance at the Texas Frightmare Weekend 2021 in Dallas, Texas in September, SLIPKNOT singer Corey Taylor discussed his new mask which he debuted earlier that month at the Rocklahoma festival in Pryor, Oklahoma. "I spent three months designing that specifically," he said (as transcribed by BLABBERMOUTH.NET). "'Cause the last one was — it was cool but it wasn't exactly what I wanted to do. So this time around, I started early. I actually started designing this before the end of the 'We Are Not Your Kind' cycle, just to make sure that I was ahead of the game and making sure I could dial in all the details and whatnot. And I actually did it with a young man named Conor Deless, who's super cool. And he flew out. I walked him through everything that I wanted to have on it. And he was able to mock something up really quick, man. And he really got to the essence of what I was trying to configure. It was almost immediate. And then, really, it was just a matter of waiting for him to build the damn thing… We did the mold. We built it right to my face, so it fits like a glove. And it's hot as balls, but it's so rad on stage; it just looks really, really cool. I'm calling it the smiling skull mask."