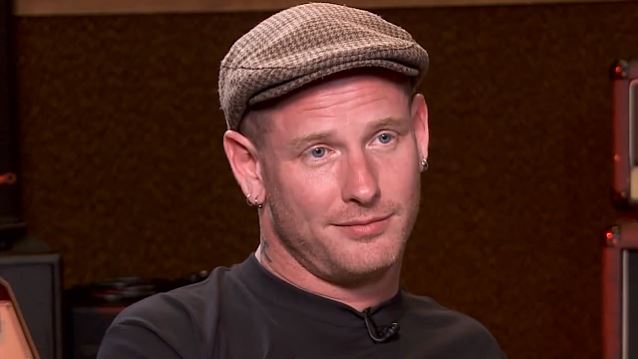 SLIPKNOT singer Corey Tayor says that fans "love" the fact that the band chose to use the aroma of "camel dung" as the official smell of the group's upcoming two-day Knotfest event, explaining that it was it was personally selected by SLIPKNOT's creative mastermind, percussionist Shawn "Clown" Crahan.

A press release announcing the Knotfest attractions stated, "Knotfest [will have] its own aroma that will infest your brain, body and clothes for days after the festival is over… The smell of Knotfest will permeate the festival grounds. Oil drums will be filled with camel shit… set aflame to last the entire festival."

During an appearance on "Corey Taylor Talks", Las Vegas' only show for teens hosted by actor and radio personality Corey Taylor (no relation),the SLIPKNOT singer said: "In order to answer [why we decided to use camel shit as the official Knotfest smell], I have to explain to you Shawn Crahan, Michael Shawn Crahan, who is the Clown. He had this idea… He's a very artistic guy. He does all of our artwork. He has directed, or co-directed, our last, I wanna say, like, 10 or 12 videos. Not only does he contribute musically, but he contributes on the creative side, and he's got a brilliant mind for it. But he is a very, very weird character. And I'm saying that out of love, Clown. But he had this idea for the smell of SLIPKNOT. And I'm, like, 'Okay. Alright. You have my attention.' Now I'm thinking, like, it's some type of aroma therapy weirdness, like, it's some kind of insense stick. And he's, like, 'No. No. No. We're gonna dry camel dung and we're gonna burn it in barrels around the fairgrounds.' And I was just staring at him. 'Really? That's what we smell like? Is burning camel poo?" Sure. I mean, hey, to each his own. I'm not gonna light up a nice little stick of camel poo at my house to just chill, but the fans love it, for some reason. 'Cause we did at the first Knotfest, and you could kind of smell it in the air, but it was very kind of weird."

Crahan added, "Since we're not a band anymore — we're a culture, everybody needs to get used to that real quick — that culture has to have a smell. You have to be able to be somewhere in the world, maybe be in a little pain, and then all of a sudden smell that and feel good again."

Taylor told The Pulse Of Radio about some of the other non-musical attractions SLIPKNOT has on tap for the festival. "We've got the Slipknot Museum," he said. "We're also bringing in a ride that we actually discovered at the Iowa State Fair and we've been riding for years. It's called the Ring Of Fire. We also have some freak shows, this thing called the — I want to say it's called the Terrordome or something like that. I think it's set on fire and there's wrestling in it — it's pretty gnarly. But yeah, I mean, we've got a lot of really cool stuff coming up at Knotfest besides all the music."

The second edition of Knotfest will take place on October 25-26 in San Bernardino, California.

More than two dozen acts will join the headliners, including FIVE FINGER DEATH PUNCH, VOLBEAT, OF MICE & MEN, IN THIS MOMENT, HELLYEAH, ATREYU and many others.

SLIPKNOT will head out on a headlining North American tour immediately after Knotfest, starting on October 29 in El Paso, Texas. The band's new album, ".5: The Gray Chapter", arrives on October 21.