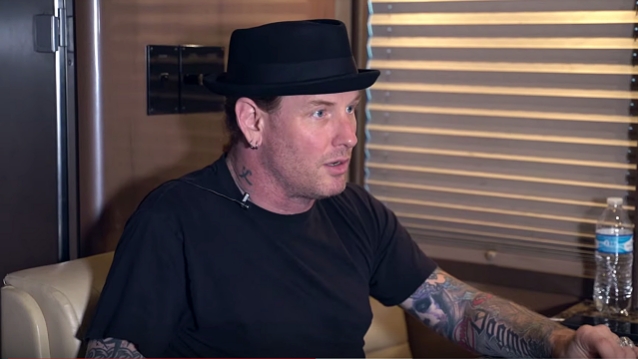 SLIPKNOT frontman Corey Taylor has once again pushed back against comments from politicians linking the most recent spate of mass shootings to popular culture.

Earlier in the month, President Donald Trump called for curbing "gruesome and grisly video games" that contribute to a "culture of violence" as a response to the horrific shooting sprees in El Paso, Texas, and Dayton, Ohio. This echoed historical patterns of moral panic, such as 1950s concerns about comic books and Tipper Gore's efforts to blame pop and rock music in the 1980s for violence, sex and satanism.

Asked in a brand new interview with Rock Feed what he thinks of people who claim heavy metal music and video games are partly to blame for mass shootings, Taylor said (see video below): "I think they're idiots. I think those people subscribe to the 'three Ds of politics,' which is 'deny, detract and deflect.' And it's exactly what it is. As soon as guns came into play again, the first thing that the GOP and the gun lobby did was find anything but the gun itself to deflect… It was the video games; it was the heavy metal music; it was the mental illness — it was all of these things. Now, never mind the fact that one of the first things that Trump did when he got into office was take away those prohibitions against people with mental illness, with a history of mental illness, being able to buy a firearm. But now suddenly that's biting you in the ass. Well, now it's the video games. There are video games all over the world; people don't have that problem. Well, it's the heavy metal music. Well, there's heavy metal music all over the world as well, in a lot of countries, and a lot of them darker than ours is. They don't have that problem.

"Look, I catch a lot of hell for the politics that I practice," he continued. "I may bend one way or the other, but I don't subscribe to one party over the next. My problem is the fact that innocent people are dying. And until people can really realize that, yes, you can be a responsible gun owner and see that there is a gun problem, until people can admit that, until people on the left can admit that not everyone who owns a gun is a fucking killer, none of us are gonna talk, and that's the problem. The problem is that there are too many guns. If you oversaturate an industry or a culture with something, nine times out of 10, it tends to go away. But that's not the case with guns, because of the way we have deified it or fetishized it. We now have this thing where if you try to get rid of some of the guns, it's instantly a threat. And to me, that smacks of addiction. Think about that. Do you really believe in gun rights or are you just addicted to the way that you feel when you have them?"

According to Taylor, part of the problem is the fact Washington's politics have become broken. "It's so fractured," he said. "You either root for your side and downplay the other side. But then it's always a competition. And that's not the way real politics is supposed to be. Somebody [said] real democracy is the politics of the half loaf. It's supposed to be a conversation, not a collision. And that's the problem is we are doing this [bumps fists against each other], and until we can do that [holds hands together with fingers interlaced], that's not gonna happen. And until people stop just shutting people out when they hear trigger words — on both sides — and start going, 'Okay. Well, how would you do it?' That's the exact way that a conversation has to start. It doesn't start by blaming heavy metal, by blaming a blameless band like THE ACACIA STRAIN," referring to the fact that a journalist attempted to place blame on the metalcore act whose hooded sweatshirt the the Dayton shooter wore. "Those poor guys. I mean, come on! Some of the nicest people on the planet. You certainly can't blame video games. Half of the countries in the world would all be dead. I mean, it's one of the biggest industries on the planet. And these chickenshit gutless [politicians] wanna blame that? Give me a fucking break!"

Back-to-back mass shootings in the United States left at least 31 dead and about 50 injured in Texas and Ohio on August 3 and August 4.

In El Paso, a gunman opened fire as customers crowded into a Walmart during the busy back-to-school shopping season, leaving 22 people dead and another 26 wounded. Just hours after the El Paso attack, a mass shooting in Dayton, Ohio, left at least nine people dead and 26 wounded.

The man accused of carrying out the El Paso shooting explained to authorities that he had been targeting Mexicans.

The Dayton shooter apparently had no clear racial or political animus, according to CNN. But he did have access to an AR-15-style rifle and 100-round drum magazines.

SLIPKNOT's sixth album, "We Are Not Your Kind", was released on August 9 via Roadrunner Records.