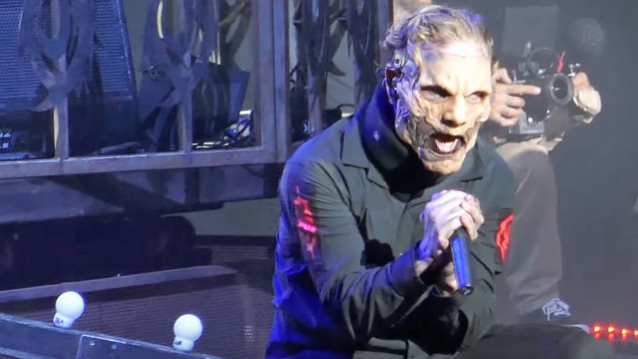 SLIPKNOT frontman Corey Taylor says that he is "okay" after taking a hard fall during the band's concert in Georgia.

SLIPKNOT played the second show of its tour with MARILYN MANSON Wednesday night (June 29) at Lakewood Amphitheatre in Atlanta. The concert once again saw Taylor performing with a neck brace after undergoing surgery earlier in the month.

One fan who attended the Atlanta show reported that Corey "took a hard fall" at the end of the set and "couldn't walk when they picked him up." Another concertgoer said that Taylor "had to be supported out" at the conclusion of the gig. A third fan told BLABBERMOUTH.NET in an e-mail: "I was front row and after the final song, after the usual thanking and waving to the crowd, Corey Taylor collapsed on stage and had to be carried off by the stage crew. As I was leaving, EMTs were rushing backstage. Throughout the show he was clearly in pain from his neck but still clearly gave it all he could. The neck pain/previous injury plus the 95º Atlanta heat and his fully covering outfit=a downed frontman. He was shaking and looked to not be in a good way as they pulled him off."

Fan-filmed video footage of the incident can be seen below.

A short time later, the SLIPKNOT singer took to Twitter to reassure fans that he was not seriously injured and that the band's tour will continue as scheduled. He tweeted: "ATL: haha don't worry, I'm okay! I THINK that fall was one for the ages haha! DAMN it hurt- but DAMN what a crowd! See you again soon! #CMFT"

Taylor was ordered by doctors to refrain from headbanging and jumping when the band kicked off its summer tour Tuesday night (June 28) in Nashville, Tennessee. The group was forced to postpone its North American trek with MARILYN MANSON by three weeks after Taylor underwent what he described as "an unplanned spinal surgery."

SLIPKNOT played a 17-song set at the Bridgestone Arena, with Taylor telling the crowd: "Let's address the elephant in the room: I fucking broke my neck. But there was no way I wasn't coming to Nashville to do this show."

He later added: "It sure is weird playing with this pillow on my neck."

Taylor previously revealed on Twitter that his follow-up appointment with the doctor went "great," but added that "for now," there will be "no headbanging" or "jumping" for him for the foreseeable future. He also offered that he expects to be "back to 90 percent" within the next four to six months, and "100 percent" in a year.

ATL: haha don't worry, I'm okay! I THINK that fall was one for the ages haha! DAMN it hurt- but DAMN what a crowd! See you again soon!#CMFT

At the end of the show tonight corey taylor fell over and had to be supported out. It didn't look good at all..

Corey Taylor from @slipknot took a hard fall at the end of the set tonight in Atlanta. Couldn't walk when they picked him up.