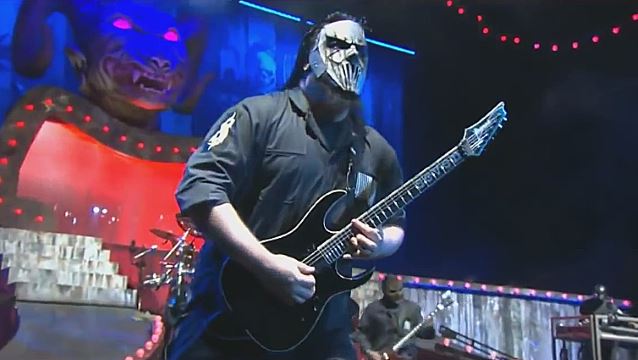 According to The Des Moines Register, SLIPKNOT guitarist Mickael "Mick" Thomson has been charged with disorderly conduct after an arrest earlier this month involving a knife fight with his brother.

A police investigation into the incident concluded that Thomson, 41, and Andrew, 35, were both responsible for the March 11 assault.

The two brothers were both charged with disorderly conduct by fighting or violent behavior in a public place.

Under Iowa's laws, the crime of disorderly conduct is a simple misdemeanor, punishable by up to 30 days in jail, a fine of $65 to $625, or both.

According to police, the altercation between Mickael and Andrew started inside Mickael's home in Clive, Iowa and spilled into the front yard about 4:25 a.m., where it became physical.

When officers arrived, the two men appeared to be intoxicated and had sustained serious but non-life-threatening injuries, with Mickael suffering a stab wound to the back of his head.

Neighbors told The Des Moines Register that they hadn't noticed anything unusual the morning of the incident.

Both men were transported to local hospitals in separate ambulances. They were booked and released, with their next court appearance scheduled for March 30. The brothers declined to seek charges against each other.

Mickael Thomson had previously committed no criminal offenses of note in the state, according to The Des Moines Register.

SLIPKNOT just got back from a stint on Australia's Soundwave festival tour and will launch a spring U.S. trek on April 25 in Fort Myers, Florida, ending on May 16 in Grand Rapids, Michigan.

SLIPKNOT's manager told KCCI that the incident will not impact any of the band's future shows.