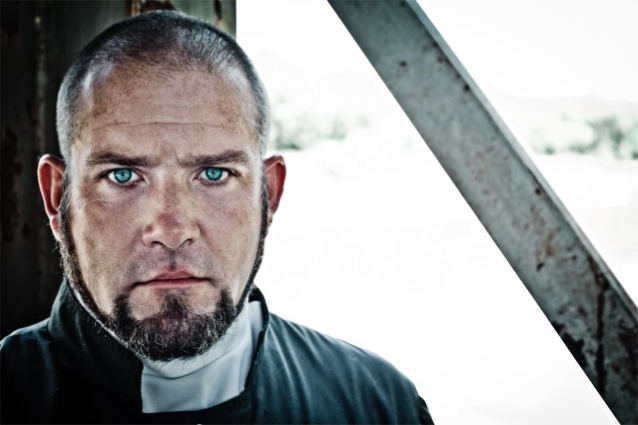 SLIPKNOT's Original Singer Has No Interest In Rejoining Band

SLIPKNOT's original singer says that he has no interest in rejoining the band.

The prospect of Anders Colsefni returning to SLIPKNOT was broached earlier in the month by current frontman Corey Taylor after a fan suggested on Twitter that SLIPKNOT bring back Anders as the replacement for recently departed percussionist Chris Fehn. Corey replied: "Fuck I would LOVE that."

Earlier today (Saturday, March 23),Colsefni shot down the possibility of a renewed collaboration with his former bandmates, writing on his Facebook page: "I'm going to take away the uncomfortable conversations that SLIPKNOT might have regarding myself and reported band vacancy by saying: I will NOT be rejoining SLIPKNOT.

"It is certainly not for any animosity I have. I simply don't know those guys anymore. I generally give those I don't know the benefit of the doubt.

"I've spent the last 27 years (through each and every band) working concrete construction to support my family but still allow time for my 'real job.'

"After many years of failed bands, failed marriages, and plenty of others, I've settled into an occupation that I can retire from. I'm gonna need the bennies — my body is going to shit!

"As much as I had dreamed of rejoining my creation (shut up — I know it's a different band now!),it is not enough of a dream anymore to risk being homeless when the tour is over!

"That being said, PAINFACE is still working behind the scenes. Look for us sometime this year!"

Colsefni, one of the founding members of SLIPKNOT alongside percussionist Shawn "The Clown" Crahan, contributed lead vocals to the band's 1996's independently released effort, "Mate. Feed. Kill. Repeat.". A short time after leaving the band the following year, Anders went on to form PAINFACE, which later evolved into ON A PALE HORSE.

In a 2011 interview with Dose Of Metal, Colsefni was asked about the reasons for his departure from SLIPKNOT. He explained: "Corey was a much better singer than I, so they brought Corey in to 50/50 the vocals with me (with him being the actual frontman) while I also continued with the drums and percussion. Corey would do the clean singing and I was to add the screaming and yelling. I tried for two months, but after the shock of all this, I couldn't 'feel it' anymore. I just felt like an idiot flopping around onstage with a ridiculous outfit, acting like a caveman. Depression. So, I shaved my eyebrows off before my last show, and announced I was done after we played 'Heartache And A Pair of Scissors' for the closing tune."

Hello fellow Earthlings!
I’m going to take away the uncomfortable conversations that Slipknot might have regarding...