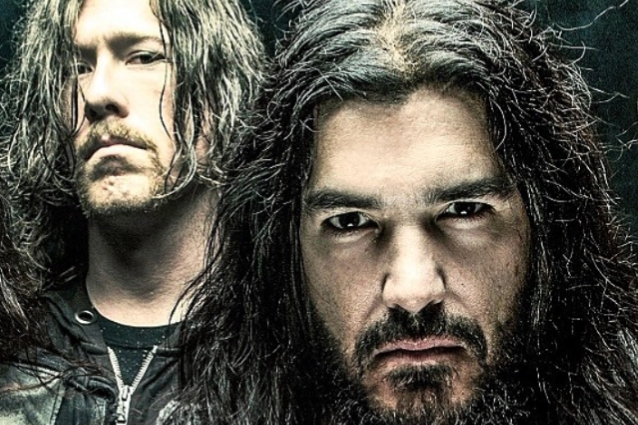 MACHINE HEAD Is Holding Auditions For New Guitarist And Drummer

Flynn stated about the musicians taking part in the auditions: "You might not know some of these guys" while "some of [them] you may."

Among the tracks that all prospective guitar players and drummers were asked to learn are "Locust", "Old", "Imperium", "From This Day", "Halo", "Aesthetics Of Hate" and "This Is The End".

Robb said that the audition process has "been awesome, really good; in fact, really confusing." He added: "[I] don't know where we are going. We've got some thinking to do."

Joining Flynn in MACHINE HEAD's current lineup is bassist Jared MacEachern, who has been with the group for nearly six years.

When he announced his departure from MACHINE HEAD, Demmel, who first played with Flynn in VIO-LENCE in the late 1980s and early 1990s, said in a statement saying that it was "simply time" for him "to step away and do something else musically." He later revealed in an interview that he was minimally involved in the making of "Catharsis", a record that he said he hated. He also said that MACHINE HEAD gradually "became a Robb Flynn solo project, and that isn't what I signed up for."

In a video message, Flynn blamed Demmel and McClain's departures on the fact that he and his bandmates "have grown apart as people. Musically, we've grown apart. I have held on too tight to the reins of this band, and I have suffocated those guys." He went on to say that his "rough edges" have given MACHINE HEAD the success that it has, but "they've also hurt the people around me. I've got a lot of drive, but I've got a lot of anger and rage. And that drive of mine has alienated folks in the band," he said.

"Catharsis" got mixed reviews upon its release in January 2018. Flynn later defended the record, telling The Rockpit: "This is us moving forward and people are still reacting to that in a fucking super-positive way and that is not the traditional arc of a band this far into their career. It makes us proud, it makes us feel a sense of pride on the music that we're doing and what we do because I think a lot of what music is for us, music is a feeling. Music is something that you can't even put your finger on, it's something that transcends explanation and I don't know where the inspiration comes from. I just write and I just write about what I feel like and sometimes it's political and sometimes it's just really fucking negative and sometimes it's stories about my past and sometimes it's about what I think about the future. Sometimes it's happy, sometimes it's party fucking songs — 'let's get hammered and wasted and fucking rage!' It's all over the map, and for me, it's a great way to express and release this stuff, and I think a lot of times metal has this surprisingly pretty conservative slant about what you can and can't do and it gets a little annoying."