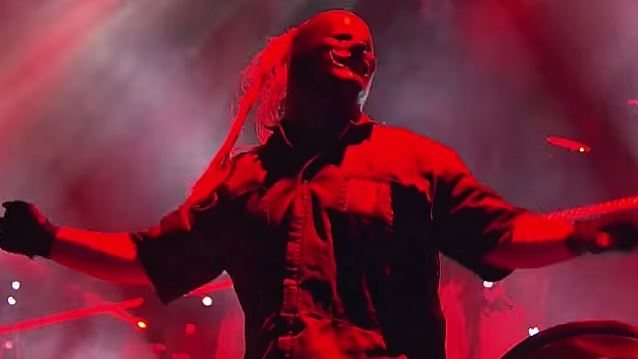 SLIPKNOT's SHAWN 'CLOWN' CRAHAN: 'I Hate People More Than Ever'

SLIPKNOT percussionist Shawn "Clown" Crahan was interviewed by TeamRock Radio earlier today (Friday, June 12) at the U.K.'s Download festival. You can now listen to the chat using the SoundCloud widget below. A couple of excerpts follow (transcribed by BLABBERMOUTH.NET).

"I think these days, as far as myself goes, I'm just trying to be the best man I can be. I'm just trying to be… You can always be a better father, you can always be a better husband, you can always be a better friend, a better bandmate… these kinds of things… So I think after all these years and this dedication and losing our brother Paul [Gray, late SLIPKNOT bassist], other things that have happened that have been devastating and mindblowing to what we do… I just try to look at my hands and realize that I have a good decision to make about something and a bad decision, and then it's kind of up to me to try to make the best one for myself, then, in return, my family, the fans… everybody. So these days I'm just trying to be the best I can be — for the band, for the fans, for… well, myself. And it makes the days go by better, and I feel like I get more accomplished. I'm kind of done with the way things used to be. It doesn't mean… I wouldn't change a thing, and I would never go do it again. You know what I mean?! I would never go back and change anything, I'm completely happy with where I am, but I've grown a lot, I've learned a lot, I've done a lot of self-reflecting, what it means to be the Clown, and what it means to be the Clown in a band called SLIPKNOT, and a father of four, husband of 23 years. My oldest is 24 now… So, life has changed, my art has changed, my mind has changed, my show has changed, I've changed… And it feels good, though. I like where I'm at. I like where the band's at. I like what we're doing. It's really nice to have the travel figured out, the hotels, and the rest, and the shows… It's just everything's really kind of grown up and matured, and I think that makes SLIPKNOT a hundred times more dangerous than anyone could ever really imagine."

On whether he ever thinks about things he has done in the past that he regrets or feels bad about:

"I think about that kind of stuff all the time, but I don't let it deter me away from my path. I'm on a path here, I'm on a mission. I think probably some of my best work is yet to come, 'cause I've gotta work harder. I used to just really design my art and my show and everything around my inner pain — whatever that is. It could be loneliness, it could be losing my parents, it could be boredom, it could be just fucking selfishness; it could be anything. But these days, like I said, I'm really fucking focused. I hate people more than ever; I hate this shit more than ever. You know… In true SLIPKNOT fashion… I'm just getting to be a grumpy old man, maybe. I don't know."