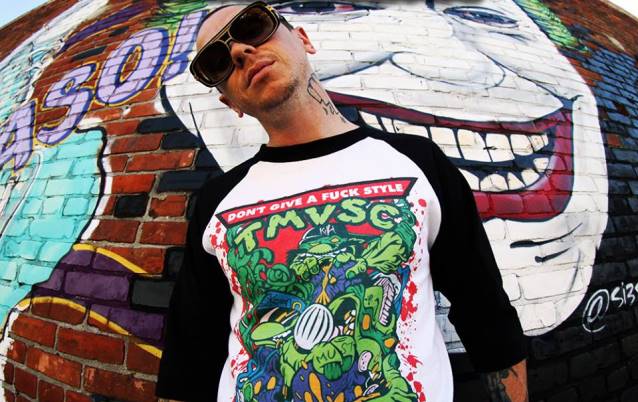 Sidney George Wilson, better known as the mask-wearing turntablist for heavy metal group SLIPKNOT, has signed an exclusive recording contract with Sono Recording Group (SRG) with digital distribution by Spotify. The Des Moines, Iowa native will also be developing artists for the label through his company Sid The 3rd Productions, LLC.

Sid Wilson has performed as a solo artist under his stage names "Sid" and "DJ Starscream" since 2003. The latter is derived from a character of the same name of the "Transformers" franchise. Tattooed with various "Transformer" images, Wilson wears a "Transformers"-inspired mask when performing as "DJ Starscream." The music he performs is an original blend of EDM, electronica, jungle, hip hop, nu metal, and alternative.

Wilson first made his mark as "DJ Starscream" in Japan, where he is also signed with Japanese label N2O Records. His collaboration with THE MAD CAPSULE MARKETS vocalist Hiroshi Kyono on a song called "HAKAI (Deathtroy)", released on "The Songs For Death Note The Movie", a tribute album dedicated to the live action movie for the second "Death Note" film, has garnered Wilson a strong following in Japan.

Wilson now looks to SRG to promote and digitally distribute his music through their exclusive deal with Spotify.

"We are very happy to be working with this massively talented and enigmatic artist. His unique artistry is quite astonishing," said Matt Strickler, general manager at SRG.

SRG signed with Spotify to be their exclusive digital distributor in 2013. Artists on the label will benefit from a blend of traditional and digital marketing.

"We believe our model represents the best possible scenario to produce revenue for an artist in today's music market," said Strickler.