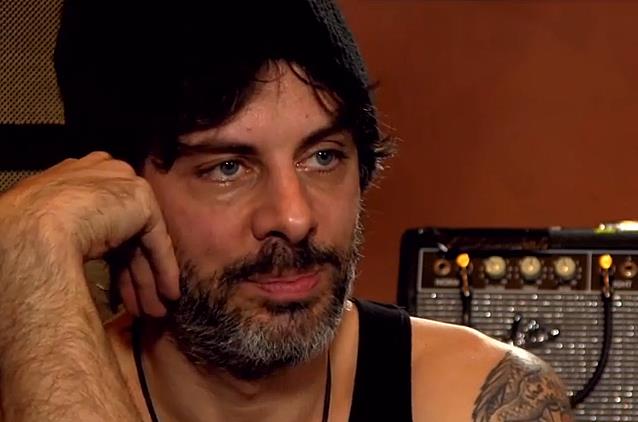 Guitarist/vocalist Richie Kotzen of THE WINERY DOGS was interviewed on Episode 81 of the "Let There Be Talk" podcast with with rock and roll comedian Dean Delray. You can now listen to the chat using the audio player below.

In a recent interview with Metal Exiles, Kotzen stated about the self-titled debut album from THE WINERY DOGS, his new power trio with drummer Mike Portnoy (DREAM THEATER, AVENGED SEVENFOLD, ADRENALINE MOB) and legendary bassist Billy Sheehan (MR. BIG, TALAS, DAVID LEE ROTH): "That is the interesting thing with this record, is that nobody lost their identity. It could have been really easy to get into the studio and everybody starts fighting for space, and there is a few reasons why it worked out the way it did. One, it is a three-piece and I am comfortable in a three-piece; it's all I ever do when I play with my band.

"I think Mike wanted to try something new, so let the cards fall where they may, so to speak. He is being Mike Portnoy, but he realizes that it's a three-piece, so he is listening and understands we are playing off of each other and playing on a smaller kit as well.

"Billy [Sheehan, bass] and I have played with each other for years, so we knew how to play together. Also, I think it had a lot to do with the way the material was written. We have songs on there that were written out of jams, just sitting in a room together and all of the parts just locked together. There were a few songs that I had written previously that I thought would be good for THE WINERY DOGS, but even on those songs, it was pretty well mapped out what was going to happen.

"The third thing that tied it together is that we have been musicians for so long that you learn how to work with other people."

Asked if he thought the album did well the first week of release because of the names on the album or the music itself or a combo, Richie said: "I think it was combinations of that, but remember, they had plenty of time to hear the music because the record was out a month and a half in advance in Japan. People have followed the band on YouTube because we have three videos out and then you have the elements of the names, because they know who we are and they are curious. They want to know what we are going to do. Are we going to make a record where I can listen to the songs or is it going to be chaos? Let's be honest, people were wondering what it was going to be like. In the end, when you hear the record, you say, 'Cool, these guys made a musical record where you can hear some crazy playing but then you have songs you can listen to and remember.'"