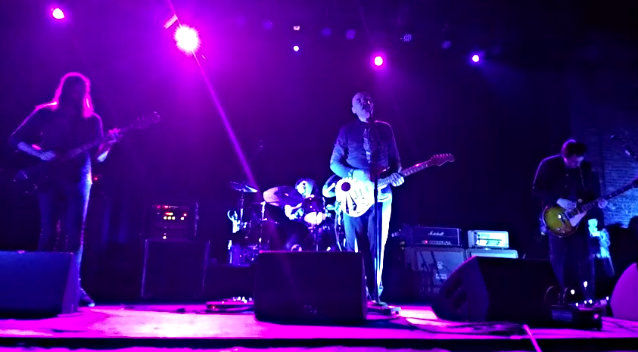 SMASHING PUMPKINS' new lineup — featuring RAGE AGAINST THE MACHINE drummer Brad Wilk and KILLERS bassist Mark Stoermer — made its live debut this past Wednesday night (November 26) at Chicago's Thalia Hall. Fan-filmed video footage of the performance can be seen below.

SMASHING PUMPKINS' new album, "Monuments To An Elegy", is due out December 9.

SMASHING PUMPKINS' short run of concerts will kick off at the Kesselhaus in Berlin on November 30 and will include stops in London on December 5, Paris on December 6 and New York on December 8. The band will also play a special outdoor show on ABC's "Jimmy Kimmel Live!" on December 10 and play at Los Angeles radio station KROQ's Almost Acoustic Christmas concert on December 14.

"Monuments To An Elegy" marks the iconic alternative band's eighth studio album and is the follow-up to their 2012 critically acclaimed album "Oceania". The new CD was recorded in Chicago with SMASHING PUMPKINS guitarist Jeff Schroeder, who's been in the band since 2007. Playing drums throughout is MÖTLEY CRÜE's Tommy Lee.

"Monuments To An Elegy" was produced by Howard Willing (who first worked with the PUMPKINS during the "Adore" sessions), Corgan and Schroeder. It was mixed by David Bottrill and mastered by Howie Weinberg, who did the same honors for PUMPKINS classics in the '90s.

"Monuments To An Elegy" is "an album within an album," part of their ongoing work-in-progress "Teargarden By Kaleidyscope" (with "Day For Night" as the project's last work).