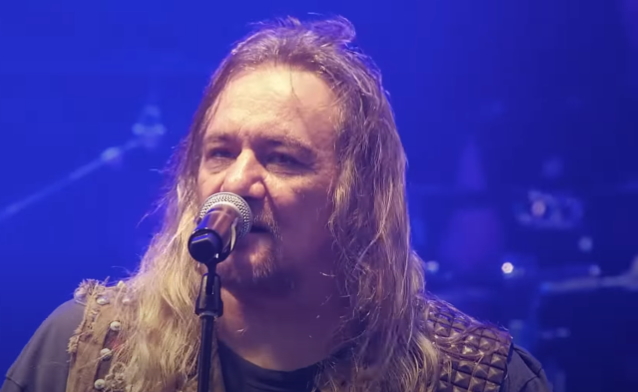 SODOM's THOMAS 'ANGELRIPPER' SUCH: 'We Never Changed Our Music'

In a new interview with "HRH Metal With Dan Chan", bassist/vocalist Thomas "Angelripper" Such of German thrash metal veterans SODOM spoke about how the music industry has changed in the four decades since the band's formation. He said (as transcribed by BLABBERMOUTH.NET): "It's getting harder nowadays, I think. When I look back at the first contract I signed, with SPV/Steamhammer, it was horrible — the contracts and all this stuff. But nowadays, everything, the complete music scene changed. Too many bands are spreading to the scene every month. If I get a new magazine — Rock Hard, Metal Hammer magazine — hundreds of bands are coming out every month. In my opinion, everything is getting out of control. Metal is getting more common.

"When we start [listening to] metal music, we wanna to be hated," he continued. "We don't want [all other] people listening to heavy metal because heavy metal has to be something really special. And, in my opinion, that is the reason why SODOM is still alive. SODOM is a band — we never changed, also in the business nowadays. We never changed our music. We always did the music we love. There was no dictation from outside changing something. When you go back to the '90s, a lot of bands changed their music because of commercial interests from the record companies. SODOM is the last band — we never changed anything. We just do the music we want. And that is the secret behind our music. But the business changed, really. It's getting more and more commercial. The metal bands — the so-called metal bands — if you're gonna see the bands live on stage with bigger shows, and I know a lot of metal bands don't play live in a 'live' show. And this is the end.

"But SODOM is still a metal band. And that is the secret. We never changed. We're gonna do metal as heavy as possible. We always try to write good songs, and we try to get better [as] musicians, with our instruments and all that stuff.

"If you talk to younger bands or younger musicians, it's really hard to get into the scene, because of the contracts," Such added. "Now record companies, they wanna have money from the merchandise selling, which the bands are selling on tour. That wasn't possible in the beginning — that was my merch; I'm gonna sell this. So I can always give the tip — if you get a record deal or a record contract, take a lawyer who's gonna check this. Don't sign anything. It's really hard. But SODOM, we never look what other bands do — we never look left or right — we just do our music, and that is the secret."

Last month, Angelripper confirmed to Agoraphobic News that SODOM has commenced work on the follow-up to 2020's "Genesis XIX" LP. He said: "We are still working on new material for a new album. We have three [songs so far]. I can tell you this will be the heaviest SODOM album ever.

"I don't know when it's gonna be released — next year or 2024 — because I wanna work on it without any pressure," he continued. "It's very important. When the songs are finished, everything is fixed, we can talk to a record company to get an option to release. That's also the business.

"But, yes, we are always active," Tom added. "During the corona times, we had more time for writing songs and recording an album. That was the only positive in these times. But 'Genesis XIX' was a wonderful album 'cause we spent more time recording it."

SODOM's 40th-anniversary album, "40 Years At War - The Greatest Hell Of Sodom", arrived on October 28 through Steamhammer/SPV. The LP includes one song from each of the previous studio albums receiving a re-recorded treatment from SODOM's current lineup. The CD and vinyl double LP with their martial cover artwork penned by Eliran Kantor (KREATOR, TESTAMENT, GWAR, among others) contain 17 tracks, all newly recorded by Such, Frank Blackfire (guitar),Yorck Segatz (guitar) and Toni Merkel (drums).

"Genesis XIX" came out in November 2020 via Entertainment One (eOne) in North America and Steamhammer/SPV in Europe. The disc was recorded by Siggi Bemm and mastered by Patrick W. Engel and comes shrouded in the cover art of Joe Petagno of MOTÖRHEAD fame.

Angelripper previously described "Genesis XIX" as "one of the toughest and most diverse studio recordings that SODOM have ever released."