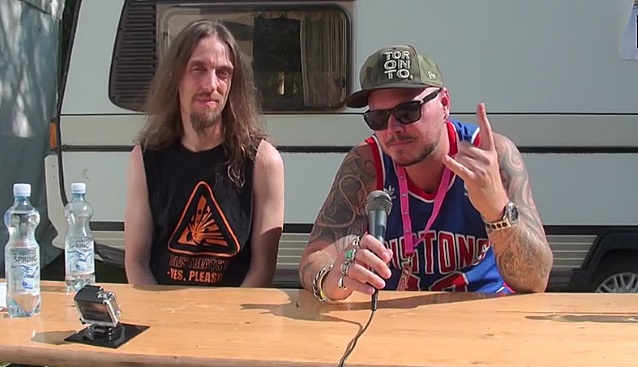 Kaaos TV conducted an interview with SOILWORK singer Björn "Speed" Strid and drummer Dirk Verbeuren before the band's July 26 performance at Qstock festival in Oulu, Finland. You can now watch the chat below.

Asked about the status of SOILWORK's upcoming first-ever concert DVD, which was filmed on March 21 at Circus in Helsinki, Finland, Dirk said: "We're in the middle of pretty much editing it. It's looking really good already. We're just kind of working on the details to get all the bonus material together; we actually did some interviews this morning. And it'll be a few more weeks, at least, until it's complete. But we're really happy with how it came out so far." Björn added: "It [was] the first time that we really performed songs from each and every album, including the latest double album as well. So it's gonna be a very long show. So I think it's gonna be a very cool mix of songs from our entire career."