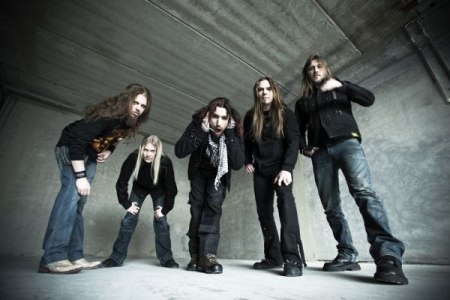 Natalie of Onslaught Radio conducted an interview with bassist Marko Paasikoski and guitarist Elias Viljanen of Finnish melodic metallers SONATA ARCTICA on March 25, 2011 at the Islington Academy in London, England. You can now watch the chat below.

"The Days Of Grays", the latest album from SONATA ARCTICA, sold around 2,000 copies in the United States in its first week of release, according to Nielsen SoundScan. The CD landed at position No. 19 on the Top New Artist Albums (Heatseekers) chart, which lists the best-selling albums by new and developing artists, defined as those who have never appeared in the Top 100 of The Billboard 200.

"The Days Of Grays" was released on September 22, 2009 in North America through Nuclear Blast Records.