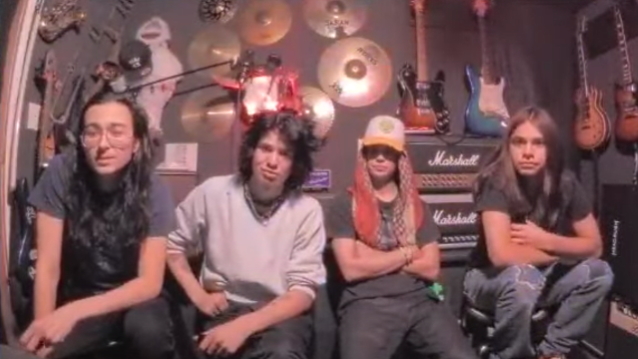 Asked in a new interview with the "Appetite For Distortion" podcast how they came up with the band name, London said (see video below): "208 was the name of my studio, like the room number, and that's kind of where me and Noah started making music together. And that was just like our sanctuary, where we could spend all hours of the day — and night — make music, sleep. So that was our secret location. I guess for me, the shit that goes down there, from the outside, is suspect; [it's] suspicious."

The members of SUSPECT208 said that they weren't bothered by the fact that "Long Awaited" has been compared to the early 2000s supergroup VELVET REVOLVER, which featured both Slash and Scott Weiland.

"I didn't try to do that [intentionally] or anything," Noah said. "I don't write songs; I just come up with it on the spot. I hear an instrumental or something for, like, 30 seconds to a minute, stop it, instantly put it in and just start recording it by myself. And as I go along, I just start coming up with different things. So that's just kind of what came out of my ear. I wasn't trying to sound like anything. My voice could sound completely different, which it does in most [other songs]. That's a very small part of my voice, that song."

In a little over two weeks, "Long Awaited" has racked up more than 800,000 views on YouTube, which came as a complete surprise to the young musicians.

"When I started seeing it get bigger, I was, like, 'Dang!'" Noah said. "I didn't really care, obviously… I care, but I know it's not a shitty song. I think it's probably one of my least favorite that I've made, surprisingly. But I still know it's a good song."

In a 2018 interview with the "Appetite For Distortion" podcast, London Hudson was asked when he realized how famous his father was. "Since I was little, especially with the VELVET REVOLVER stuff, because that was the most I toured with him, was for the VELVET REVOLVER stuff," he said. "Seeing that many people at the shows was kind of crazy, and how they all just worshipped. Then going on the last GN'R tour, and seeing all those people who still like him for much older stuff, is when it really clicked, going on that tour. But it never really hit me until this summer, where I was like, I don't want to live in his shadow, when I started playing in the band. That's the main reason I don't play guitar or stringed instruments."