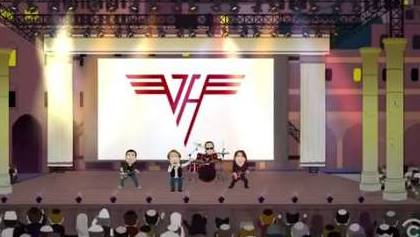 VAN HALEN helped usher in peace on Earth during the "Ginger Cow" episode of "South Park", which aired last night. In the episode, Jews, Muslims, and Christians finally come together in total harmony, and the only song worthy of such a profound commemoration is is a rocking version of "Ain't Talkin' 'Bout Love". Check out the clip below.

Earlier in the year, VAN HALEN singer David Lee Roth gave an interview to Rolling Stone in which he expressed his desire to work on fresh material with Eddie Van Halen and tour outside the U.S., saying, "We have an audience and we have a potential future in many, many places . . . I don't know where the VAN HALEN future lies aside from the States."

The band has been touring in support of its February 2012 release, "A Different Kind Of Truth", which was its first album with Roth in 28 years.