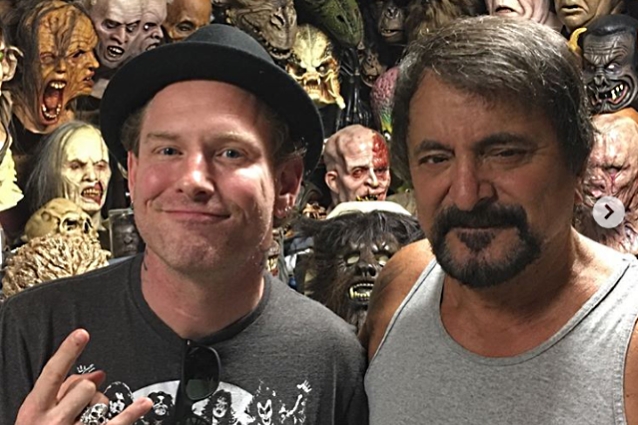 Special effects legend Tom Savini has commented on the fan criticism of the mask he helped create for SLIPKNOT frontman Corey Taylor.

Savini, whose extensive career in the film industry and especially the horror genre dates back to the late 1970s, including in such films as "Friday The 13th", "Dawn Of The Dead", "From Dusk 'Til Dawn" and many others, was asked by Revolver magazine how his involvement with SLIPKNOT came about. He said: "It's amazing. I was on a plane with my wife looking at old photographs, and there's a picture of her with Corey in 2014. I think it was my assistant, Jason Baker, who talked to him backstage at a show and Corey mentioned needing a mask. I guess my assistant said, like, 'Hey, I work for Tom Savini,' and the next thing you know Corey Taylor is in my house playing with my cats, then we made a cast of him. Then we did the mask, and the mask has gone crazy! There was a lot of negative response, initially. I just got a copy of Kerrang! with Corey talking about the man behind the mask — about me — in that magazine, but the fans were like, 'Savini? Oh shit, my sister could have done better than that.' Someone even fastened a milk carton to their face and posted a side-by-side and said, 'Nailed it!' Regardless, the mask looks excellent."

Savini said that all credit should go to Taylor for the way his mask is presented in band photos and in a live situation.

"You know, he puts the makeup on underneath it, the hood, everything," he said. "It's a nice mask, but he sells it. He's the one who makes it look the way it looks."

Earlier this week, Corey said that he will "never" change his new SLIPKNOT mask, saying that he gets a kick out of the fact that "it bothers SOOOOOO many people."

Taylor spoke about the inspiration for his new mask during a recent interview with Kerrang! He said: "My vision was about trying to create something uncomfortable — not only for me to wear, but for people to look at. I wanted it to feel like it was something that was created in someone's basement — something that was made specifically to fuck with people. It's the representation of public opinion turning on a dime — they want to tear people down for the way they live, even if they don't really know them. It's been liberating to embrace that side and be, like, 'Fuck you. I really don't give a shit what you think about me, so here's this!'"

The members of SLIPKNOT performed with their new masks for the first time on May 17 when they appeared as the musical guests on "Jimmy Kimmel Live!" The band played two songs on the show's outdoor stage in front of a standing-room-only crowd.

My profound pleasure to be a guest @thetomsavini house. Still geeking out- thank you so much for having me!!