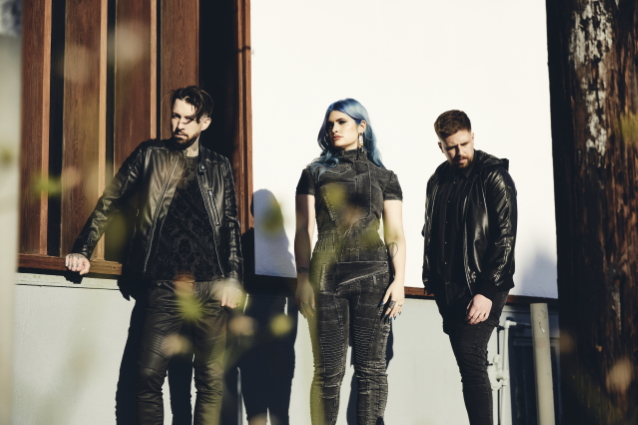 SPIRITBOX Releases Video For New Song 'Circle With Me'

Canadian metal outfit SPIRITBOX has released a brand new song, "Circle With Me", via Rise Records. The track features the glorious combination of ethereal vocals, bombastic riffs and savage screams that make up the utterly unique SPIRITBOX calling card. It is accompanied by a gorgeous music video directed by Orie McGinness that perfectly complements the lyrical theme of the song with a constantly revolving shot around the band as they perform.

Speaking about the new track, singer Courtney LaPlante shares: "This song was written in the studio as a last-minute addition, one of the many reasons we are so grateful to no longer be exclusively working remotely. It captures the spectrum of emotions I've been feeling lately about my music. From the anxiety I feel about messing up to a confidence meant to protect me from self-doubt. Visually, we wanted to present the viewer with the image of us that we miss the most: us performing on stage, with nothing to hide behind: instruments, some lights, and beautiful camera movement."

"Circle With Me" follows the band's two breakout hit singles released last year — the heartbreaking and otherworldly "Constance" and the unrelentingly brutal "Holy Roller". Between them, they have clocked up a staggering 18 million streams to date, with "Holy Roller" debuting at No. 25 on Billboard's Hot Hard Rock Songs and spending seven weeks at No. 1 on SiriusXM Liquid Metal's "Devil's Dozen", with the remix version of the song featuring Ryo Kinoshita of CRYSTAL LAKE spending five weeks at No. 2.

SPIRITBOX recently finished work on its debut album which is slated for release later this year.