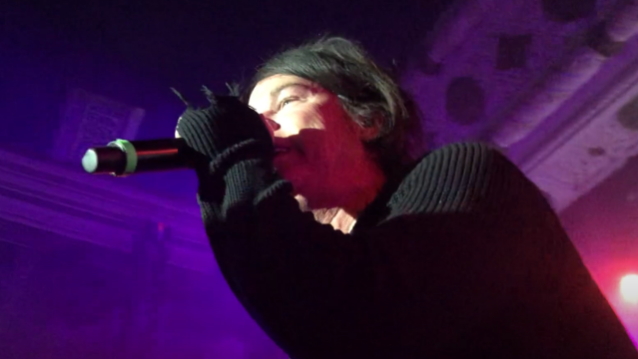 STABBING WESTWARD vocalist Christopher Hall has been diagnosed with throat cancer. As a result, the band has been forced to cancel its previously announced shows this summer while he undergoes treatment for the disease.

On Wednesday night (July 27), Hall took to STABBING WESTWARD's social media to write: "I'd like to apologize to everyone who made travel plans to see us in August and September. We've had to put those shows on hold while I deal with a serious health issue. I've been diagnosed with throat cancer. prognosis is really good but it's going to involve a couple of surgeries and 6-8 weeks of chemo and radiation. So unfortunately, I won't be singing anytime soon. I'm hoping to be feeling more human by Halloween and have my voice back by Christmas. So again, sorry for the inconvenience."

Blending the scathing electronics of underground industrial/rock with the emotive melodies of goth and a decidedly radio-friendly sensibility, STABBING WESTWARD rose to great heights in the mid-1990s alternative boom. Formed in 1986 by Flakus and Hall, the band went from underground cult sensation to the heights of critical and commercial success thanks to such songs as "Shame", "Save Yourself", "So Far Away" and "What Do I Have to Do?" To this day, these songs remain anthems of heartache, dejection, rage, betrayal and depression. With two gold albums and numerous hit singles, STABBING WESTWARD fell from grace with the 2001 self-titled album amid personal and professional turmoil, disbanding the following year and leaving a void in modern music that was somewhat filled by Hall's later work in THE DREAMING. However, it was the release of that band's "Rise Again" in 2015 that the seeds were sown for a reunion. That album saw Flakus once again making music with Hall, with STABBING WESTWARD guitarist Mark Eliopulos joining THE DREAMING onstage in Chicago for a set of past hits. In 2019, Hall and Flakus came together again to release the "Dead And Gone" EP, the first new STABBING WESTWARD material in 18 years. Written and produced by Flakus and Hall over the course of three years, and recorded in multiple states and time zones, these songs captured the very essence of the STABBING WESTWARD sound.

"Chasing Ghosts" was made available via COP International Records. It features 10 tracks that showcase the industrial rock band's characteristic sound with a modern sheen that picks up right where they left off with their last full-length in 2001. With the new tracks, STABBING WESTWARD has not only managed stay true to their original sound, but also expanded it to fit the frantic new reality of the 21st century.

"Chasing Ghosts" features brand-new songs as well as re-workings of the band's acclaimed 2020 reunion EP "Dead And Gone" that found original founding members Hall and Flakus honing in on the incredible partnership that once produced a string of hits that dominated alternative radio and film soundtracks, including "Shame", "Save Yourself" and "What Do I Have to Do?" — and resulted in two gold records.

To recreate that original chemistry, the band recruited the legendary producer John Fryer to again helm "Chasing Ghosts". Fryer, whose production credits include DEPECHE MODE, NINE INCH NAILS, 4AD, COCTEAU TWINS and LOVE AND ROCKETS, originally worked with STABBING WESTWARD on their best-selling early releases "Ungod" (1994) and "Wither Blister Burn + Peel" (1996). "Chasing Ghosts" was also mastered by Tom Baker who, like Fryer, worked with STABBING WESTWARD on their early releases and is part of the reassembled production team on the latest album.

I'd like to apologize to everyone who made travel plans to see us in August and September. We've had to put those shows...