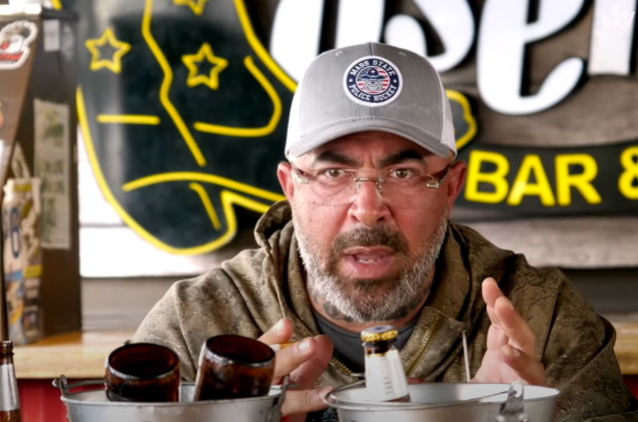 During an appearance on a recent episode of the "Uncut With Jay Cutler" video podcast, STAIND frontman Aaron Lewis was asked if he has always been interested in politics. He responded (as transcribed by BLABBERMOUTH.NET): "As I got older, I got more vocal about it. And I think that that's a natural progression that happens. You get older, you taste real responsibility in life, you have commitments and obligations, and things start getting a little bit more real. When you've got a wife and kids and a house and bills and responsibilities, you start thinking about things a little bit differently. It starts mattering a lot more. And the fact of the matter [is] I'm 50 years old. It's now my turn. This is now my generation. I'm now the generation that is responsible for the well-being of this country. So I'm not gonna be quiet about it. Now is my time to not be quiet about it in any way because it's in my hands now. This is just generationally passed down to each next generation, and every generation is responsible for protecting it so that our kids and our grandkids enjoy as much, if not more than, we did when we grew up. And that's lost. I don't even know what the fuck is going on."

Lewis, an outspoken conservative rocker who reinvented himself as a solo country artist in the last decade, also touched upon claims that public school teachers and administrators around the U.S. are indoctrinating students to think a certain way, particularly in the teaching of sex education, gender identity, racial injustice.

"Have you seen some of the shit that Disney is responsible for putting into the classrooms of our children?" Aaron asked. "And this is just Disney. Forget about the rest of the factions of it that are just hard-pressing, turning our kids' education into an indoctrination of their movement. Which, their movement is as anti-America as you can possibly create in one movement — every facet of it." He later added: "The gender thing, the critical race theory thing [Editor's note: Referring to an academic legal framework that asserts that racism is systemic and embedded in many American institutions]… This is criminal what they are doing — criminal. Every teacher out there that has taught a child anything that has to do with sexual orientation should be in jail. There's laws for grooming on the books. You have no business talking to my children, or anybody's children, about that. They're not adults — not even close. I can't even believe the argument is about up to eight years old. After eight, you're gonna tell me that after eight years old, it's okay for a complete stranger to talk about their sexuality or my child's sexuality with them without me knowing it or being there. Is this really what is going on in this fucking country? Eight! How about at least high school. How about once you're in high school you've still gotta get written permission from the parents to talk about that shit? Maybe they've already got their speech worked out.

"A teacher's responsibility is to teach curriculum," Lewis said. "It was never the job of a stranger [to talk to my kids about their sexuality]. It's a stranger. I don't know what a teacher is doing after hours; I just know how they are when they interact with my kids. It is a stranger talking to your children not only about sex but all sorts of aspects of sex, from the most depraved things to the most normal of things. Who the fuck do you think you are that you have any right to talk to my child about any of that?"

In recent months, dozens of bills have been introduced that seek to restrict how gender and gender identity are taught at schools. Some of the bills also include language restricting how schools can teach about race and racism. Several bills targeted critical race theory directly, despite the fact that critical race theory is not taught in K-12 schools.

Conservatives have been vocal about the notion that "critical race theory" is taught in secondary public schools and it must be eradicated because, as they say, it unfairly makes white children feel bad.

Disney recently became embroiled in a controversy over its support of the LGBTQ community following its botched response to a proposed Florida law, labelled "Don't Say Gay" by its critics, to restrict discussion of sexual or gender identity in primary schools. Disney was initially reluctant to speak out against the bill, which was viewed as dangerous and discriminatory by staff at its Orlando theme parks, but eventually reversed course and condemned the bill. In response, some conservatives accused the company of producing content aimed at "grooming" American children.

At many of his recent solo concerts, Lewis bashed President Joe Biden and Dr. Anthony Fauci over vaccine mandates and other policies.