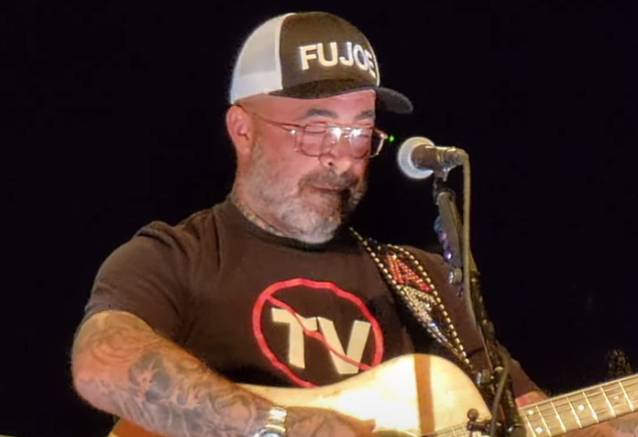 STAIND frontman Aaron Lewis has once again attacked American politicians and the national news media, telling his fans at a recent concert that "they've been dumbing us down for generations."

The 50-year-old Lewis, an outspoken conservative rocker who reinvented himself as a solo country artist in the last decade, voiced his views on what he is seeing and hearing from the politicians and the media before performing his controversial single called "Am I The Only One" during his July 2 show at The Bluestone in Columbus, Ohio.

"So, I was explaining this to somebody the other day, and they were, like, 'Wow. That's a really good way of putting that.' So everybody here realizes that the Constitution is the fucking rulebook for the government. You understand that, right? It gives us all the power, is what it does. That's why they're always trying to change it; that's why they're always trying to fucking do little things that dig away at it — because it's their fucking rulebook.

"The Bill Of Rights is ours," he continued. "The Constitution is the rulebook of the government, and they are not supposed to operate outside that fucking rulebook in any way, shape or form, or they're breaking the rules that they have to follow. And when they do that, when they break their own rules that they have to follow, we the people have every right to fucking remove them. Because they're breaking the rules.

"This country has rules. The government has rules that they have to operate on. Our founding fathers were so fucking smart. The only thing they fucked up on, really, was term limits. It is absolutely insane that we allow people to stay as politicians for a lifetime. That's fucking crazy, people. How can you expect that person to not be bought and paid for.

"It's up to us," he added. "We are the people. This is our fucking country. They're running this country into the fucking ground on purpose. What the fuck are we going to do about it? Are we gonna sit in our fucking happy little spaces and wait for fucking Superman to come and save us? Because this country is gonna be gone — gone."

When somebody in the audience started chanting "USA! USA!", Lewis countered: "Chanting 'USA' ain't gonna do a fucking thing. It's time to do something, before this country that has been put in our hands… This is our country now. The old people are about to die. The young people don't know what the fuck is going on. It's our country. We are responsible for what happens from here forward. That's how it works. This country gets handed from generation to generation so that we are now the stewards for our children and for our grandchildren and so on and so forth, and if we sit here and allow them to destroy the best country that has ever existed on the face of the earth, in the history of mankind, then we deserve to go down with the ship.

"I'll tell you what: I ain't going down like that. I ain't. I will run my fucking mouth until the day I die. 'Cause it's the truth. And facts matter. And facts have become disinformation sometimes," Lewis added somewhat ironically considering the fact that he has repeatedly spread COVID-19 conspiracy theories and pushed the false story that Ukraine was developing biological weapons with the assistance of the U.S. government. "And we sit there and we let it happen. But we do — we do. You're gonna go home to your fucking happy lives and your dogs and your kids, and tomorrow it's gonna be the same thing — you're gonna allow this country to slip just a little bit further out of our hands. Until we fucking stand up and do something, we're doing nothing. Because I promise you the Democrats are behind the doors going, 'Ooooh. What the fuck can we do now to fuck this country?' I promise you. 'Cause that's the ultimate goal. They're so bought and paid for by worldwide money, if we don't stand up, we're fucked.

"So, this is my part. This is my little — it's my gift to… something. I don't fucking know. This is for the cause," Lewis said before launching into "Am I The Only One", which takes aim at liberals and touches on American flags burning and statues that have been removed in the country.

The Constitution has been amended 27 times since it was drafted in 1787, including the first 10 amendments adopted four years later as the Bill of Rights. The Constitution has changed over time to account for the changes that needed to happen in the U.S., particularly as it relates to slavery, discrimination, segregation and sexism, among other issues. For decades, the Supreme Court set precedent and made changes to the Constitution through its decisions in order to protect citizens from unjust harm and imposition on their rights.

Written in 1787, ratified in 1788, and in operation since 1789, the United States Constitution is the world's longest surviving written charter of government.

More a concise statement of national principles than a detailed plan of governmental operation, the Constitution has evolved to meet the changing needs of a modern society profoundly different from the eighteenth-century world in which its creators lived.