As Los Angeles begins to re-open and vaccinations continue to roll out globally, California rock legends and global philanthropists STEEL PANTHER are giving the world the perfect way to kick off the summer with the "Fans Come First" livestream. Broadcasting live on May 22 — the Friday of Memorial Day Weekend — the performance marks the band's first livestream since the cancelation of "Gobblefest" last December. The show will stream globally at 2:00 p.m. PDT (Los Angeles),5:00 p.m. EDT (NYC) and 10:00 p.m. BST (London).

"Fans Come First" will differ from any other livestream the band has done, since the setlist will be curated directly from the Fanthers. Fans can visit www.steelpantherrocks.com to submit suggestions for the set list and upload videos (encouraged to be as short as possible) of themselves talking about how they discovered STEEL PANTHER or their favorite song, etc. The videos will be shared throughout the "Fans Come First" event.

Tickets for the show are $15 each, with a portion of the proceeds for each ticket sold going to benefit Dogs Without Borders. Fans who purchased tickets under 2-for-$20 promotion last year will automatically have access to the show. The stream will be available until June 6, and ticket buyers will have access to the Rockbuster Video Archive to watch past streams as well from the time they purchase the ticket until that date.

For more information and to purchase tickets, head to this location.

STEEL PANTHER said in a statement: "It has been over six months since we have been able to do a livestream from Los Angeles. With summer just around the corner, we figured now is the perfect time to come together with the fans and help some dogs while at it. The fact the fans will be picking the set list for this one is something that we couldn't be more excited for. It is going to an adventure for us as much as it will be for them."

Earlier in the month, STEEL PANTHER confirmed that it has commenced the recording process for its sixth studio album. The follow-up to 2019's "Heavy Metal Rules" will tentatively arrive before the end of the year. 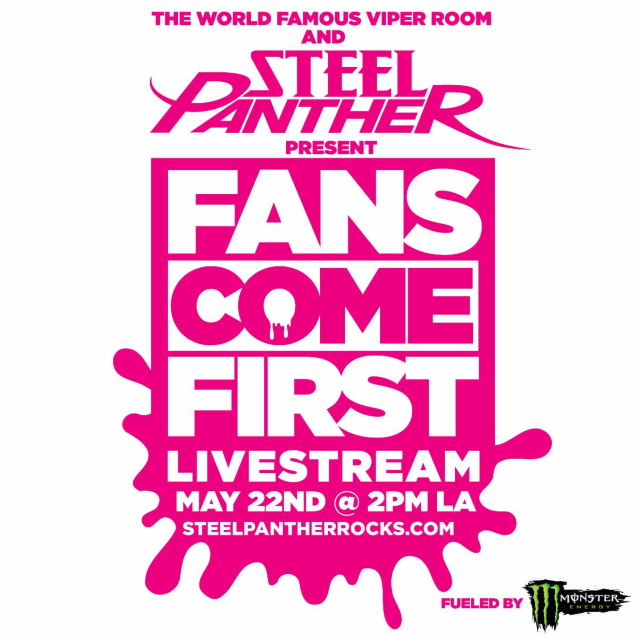