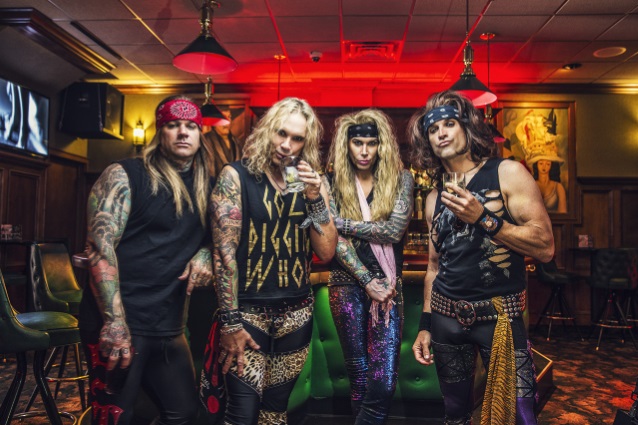 STEEL PANTHER Guitarist: 'I Don't Know If We'll Ever Do A Cover Album'

STEEL PANTHER guitarist Satchel was recently interviewed by Stefan Bradley. You can now listen to the chat using the SoundCloud widget below.

Asked if there is any chance of STEEL PANTHER ever releasing a full-length album of covers, Satchel said: "I don't know if we'll ever do a cover album, although we could do it and make it sound great. But I think, for me personally, I love to write songs and we've got songs ready to go for our fifth studio album already.

"I think the next album that we do is gonna be another killer STEEL PANTHER record and it's gonna be like all the others: there will be people that hate it first, but it will grow on everybody and it will be another classic album full of originals," he continued.

"I don't know how many more covers I wanna do. I like doing original stuff, and I feel like STEEL PANTHER is… We're a band that has a lot to offer in so many areas. Our live shows is great, we're natural-born entertainers, we love to have sex with women on stage — that's all very entertaining as well — but we release records that are really fun to listen to with really hooky songs. And I feel like, unlike a lot of bands, we pay special attention to writing the hookiest songs we can. I don't feel like there's ever a dud; I feel like there's a lot of great songs on all of our records, and that's why people keep coming back — 'cause they like to listen to those songs."

STEEL PANTHER is continuing to tour in support of its latest album, "Lower The Bar", which was released in March 2017 via Kobalt Music Recordings. The disc was co-produced with regular collaborator Jay Ruston, and includes eleven songs recorded at studios in North Hollywood and Sherman Oaks, California, with an additional two tracks on a Best Buy deluxe edition.