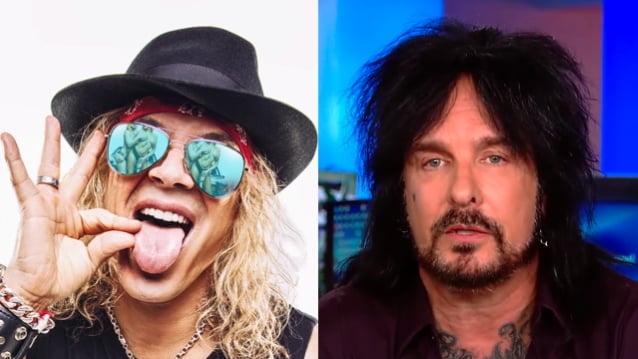 STEEL PANTHER singer Michael Starr says that "the last thing" he wants to do is have a member of MÖTLEY CRÜE mad at him.

Starr addressed the Sixx online feud in a new interview with Elliott Fullam of Little Punk People. Asked if he had heard from Sixx since their Internet exhange late last year, the singer responded: "Hopefully that thing was just like a blip in the, you know, heavy metal news for now. I think if we were to run into each other, I myself would totally be, 'What's up, dude?' That's the last thing I wanna do, is have a band that influenced my musical taste and direction be mad at me. But sometimes there's really nothing you can do about that kind of stuff; you just have to live with it."

Starr revisited the subject toward the end of the video when Elliott asked him if he had anything else to add.

"People were saying, 'What are you doing? Why are you guys arguing?' and I was, like, 'Yeah, you're right. Why are we arguing?' It's silly," Michael said. "There's no reason to do that, and it's over social media. And I know if we were on a festival or in the same room, I'm not gonna ignore the guy. I'm a fan. I'm gonna go up and say hi. And if he wants to not be my friend, then that's one thing, but I would totally walk up to him and say hi."

Last year's episode was not the first time members of STEEL PANTHER and MÖTLEY CRÜE had traded barbs. In 2017, Zadinia said that his band "really felt unwelcome" during its tour with MÖTLEY CRÜE several years ago. The drummer, whose real name is Darren Leader, told Music Life Magazine: "[MÖTLEY CRÜE members] Tommy Lee and Nikki Sixx did not like it when we went on tour with them in 2011. And that was the only time that we really felt unwelcome. The thing with those guys is I think they thought we were actually making fun of them directly. And I just gotta chalk that up to their egos being too big, because nothing that we do has anything to do with them directly. But we ended up doing the tour and it went off great and everything was totally fine," he said, adding that it was a European tour and that DEF LEPPARD was actually the top-billed band on the jaunt.

In 2018, STEEL PANTHER guitarist Satchel acknowledged that not everyone is a fan of his group's over-the-top, juvenile sex-and-drugs schtick. "There are bands that hate our guts," he told Meltdown of the WRIF radio station. "We did a tour a few years ago with DEF LEPPARD and MÖTLEY CRÜE. And DEF LEPPARD, they got us on the tour, and it was an arena tour in the U.K. And they love us — they were so nice and so cool. And MÖTLEY CRÜE was on the tour, and they hated us. They wanted to kill us — every night they wanted to kill us. They talked to us, like, once the whole tour. And Tommy Lee and I, we just got into it — we butted heads a lot. 'Cause Tommy Lee… I don't know why he hates us so much. Listen, I extended the olive branch. I wanted to be friends with them. I think some people feel threatened. I think maybe Tommy Lee feels like we're poking fun at him personally. But we're just having fun… And someday maybe MÖTLEY CRÜE will be our friends, but I think Tommy Lee would love it if one of us got hit by a bus."