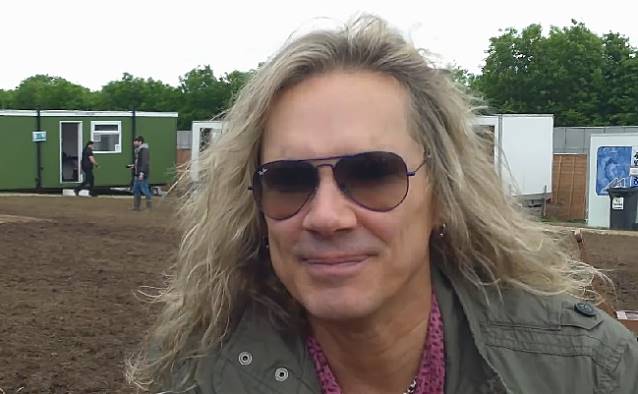 On March 7, Dave "Higgo" Higgins of the "Distortion" show, which airs on Australia's long-running rock station Triple M, conducted an interview with vocalist Michael Starr of Los Angeles glam-metal jokesters STEEL PANTHER. You can now listen to the chat below.

Regarding naysayers that say STEEL PANTHER is a joke-metal band, the group's drummer Stix Zadinia told the South Bend Tribune: "Listen to our record and tell us that our songs aren't better than most of the bands out there. How funny is that? At the end of the day, it comes down to the songs. I think our songs — without sounding egotistical — I think our songs are great. When you hear the hooks in our songs, you hear the playing and you hear the vocals, you throw that up against any band in any era, and I think it stands up."

STEEL PANTHER will release its third full-length album, "All You Can Eat", in the United States on April 1 on Open E Records via Kobalt Label Services (KLS). The 12-song CD, which was produced by Jay Ruston (ANTHRAX, ADRENALINE MOB),is available for pre-order at SteelPantherRocks.com.

The debut single, "Party Like Tomorrow Is The End Of The World", was released in November 2013 with a star-studded video directed by Rob Riggle that has been viewed over 750,000 times.