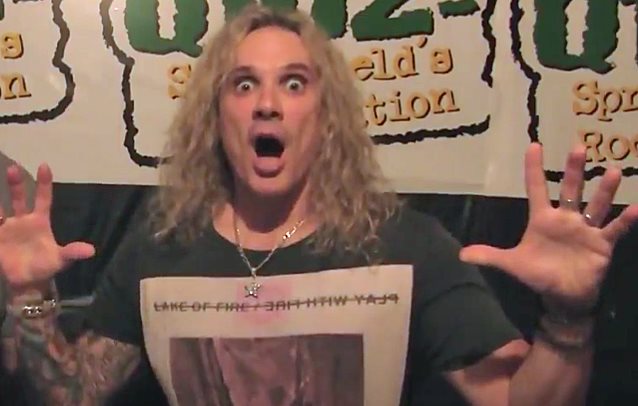 Sean of Q102, Springfield's Rock Station, conducted an interview with vocalist Michael Starr of Los Angeles glam-metal jokesters STEEL PANTHER at this year's Rocklahoma festival, which was held May 27-29 at Catch The Fever Festival Grounds in Pryor, Oklahoma, just outside Tulsa. You can now watch the chat below.

Asked about the progress of the recording sessions for STEEL PANTHER's follow-up to 2014's "All You Can Eat" album, Michael said: "Satchel [guitar] finished the guitars and the bass and the drums, and now all we've gotta do is have the session singer come in and sing, and we'll be done. I mean, I'm singing. I'm gonna try and do it all on my own.

"I think it's gonna come out in October, if we get it done. But we're gonna tour in between, like we always do. Last record, we actually recorded vocals on the bus, so it works out good."

"Every STEEL PANTHER song and album is from an experience that we've had, so it'll probably come from the experience of touring this year. 'Cause we've got a lot of tours lined up this coming summer and fall. We're doing an Australian tour next month, a Canadian tour the following month, then we're going to Europe to do a festival run. And then we come back and Lexxi [Foxx] is doing… he's gotta go to jail for two weeks for a DUI. And then we get back out, and then we go straight back to Europe to do our own headlining tour."